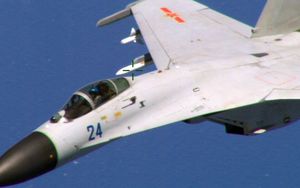 This image, obtained on 22 August, shows a Chinese fighter jet in a photo taken by a US Navy P-8 crew. Photo: AFP / DEPARTMENT OF DEFENSE / HANDOUT

A Pentagon spokesperson said the jet came within 10 metres of the US Navy plane and made several close passes and performed manoeuvres in an apparent attempt to show off its weaponry, the BBC reports.

"It's obviously a deeply concerning provocation. We've communicated directly to the Chinese government our objection to this type of action. What we've encouraged is constructive military-to-military ties with China and this type of action clearly violates the spirit of that engagement," he said.

"We've made our concerns known directly to Beijing."

Correspondents have said that it is the fourth such incident since March.