The head of a major Australian employers' organisation says that derogatory comments about China by the billionaire politician Clive Palmer are terrible for Australia's reputation. 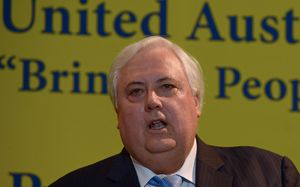 Mr Palmer, a mining magnate and head of the Palmer United Party, said in a television interview on the ABC's Q&A programme last night that the Chinese are 'bastards' and 'mongrels' who want to plunder Australia's resources.

Mr Palmer is embroiled in a legal battle with a Chinese state-owned company.

Australian Industry Group chief executive Innes Willox said the comments had made international news for all the wrong reasons.

"When you throw sand in the face of potential investors that's just sending all the wrong signals and there's real concern that this will have real long-lasting consequences."

The Chinese embassy in Australia has labelled Clive Palmer's stinging verbal attack on the country as "absurd" and "irresponsible".

On the ABC's Q&A program last night, Mr Palmer called the Chinese government "bastards" and "mongrels" and claimed they "shoot their own people".

The Chinese embassy in Australia has labelled the verbal attack as 'absurd' and 'irresponsible'.

A spokesperson for the Chinese embassy said the comments "were full of ignorance and prejudice".

"We believe that a sound China-Australian relationship serves the fundamental interests of both countries. It is and will always be supported by the two peoples," the spokesman added.

Mr Palmer has since said he was not referring to the Chinese people as a whole.