Three and a half decades after the genocidal rule of Cambodia's Khmer Rouge ended, a United Nations-backed war crimes tribunal has jailed for life the only two leaders of the regime left to stand trial. 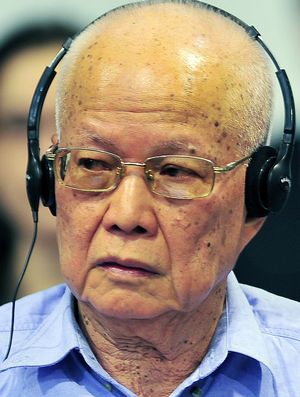 Khieu Samphan, the regime's 83-year-old former president, and Nuon Chea, its 88-year-old chief ideologue, face sentences ranging from five years to life for their role in the 1970s terror.

Two top Khmer Rouge leaders have been jailed for life after being convicted by Cambodia's UN-backed tribunal of crimes against humanity.

They are the first top-level leaders to be held accountable for its crimes.

Up to two million people are believed to have died under the Khmer Rouge - from starvation and overwork or executed as enemies of the state.

Cities were emptied and their residents forced to work on rural co-operatives. Many were worked to death while others starved as the economy imploded.

During four violent years, the Khmer Rouge also killed all those it perceived as enemies - intellectuals, minorities, former officials - and their families. 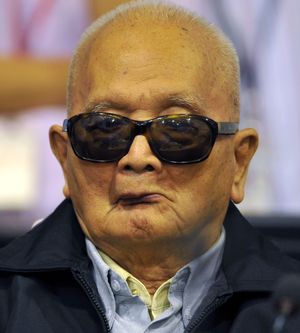 Skulls are still displayed at the Choeung Ek killing fields memorial in Phnom Penh on 25 June, 2011

Nuon Chea was seen an ideological driving force within the regime. Khieu Samphan was its public face.

Prosecutors argued that they formulated policy and were complicit in its brutal execution.

Over three years the court has heard from some of those who lost entire families to the regime.

"My anger remains in my heart,'' Suon Mom, 75, whose husband and four children starved to death, told the Associated Press news agency.

"I still remember the day I left Phnom Penh, walking along the road without having any food or water to drink."

Both men denied the charges against them. In closing statements last year, they expressed remorse but said they had neither ordered deaths nor been aware of them.

The pair also face a separate genocide trial. The case against them was split to accelerate proceedings, because of their age.

Two other former Khmer Rouge ministers were to be tried with them.

Ieng Sary, the former foreign minister, died in March 2013. His wife Ieng Thirith, who served as the regime's social affairs minister, has been ruled unfit to stand trial.

Before this, former prison chief Duch was the only senior Khmer Rouge leader who had been held to account for the regime's crimes.

He was jailed in 2010 for running the Tuol Sleng prison, where thousands of people defined as enemies of the regime were tortured and killed.