Israel is reportedly willing to extend the temporary ceasefire in Gaza as talks go on to secure a permanent agreement.

In the second day of a 72-hour truce, neither side has broken the pause in hostilities. 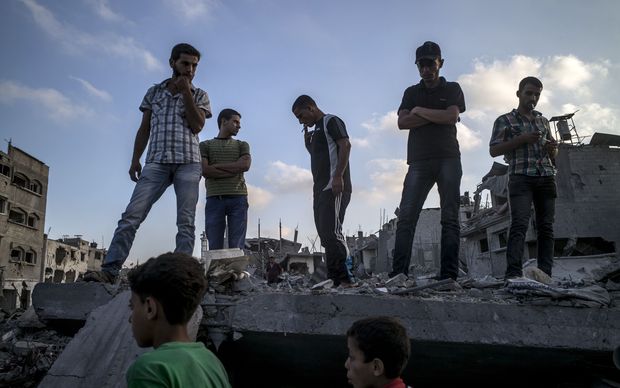 Palestinians stand on top of a destroyed building in the devastated area of Shejaiya in Gaza City. Photo: AFP

Indirect talks are underway in Cairo in an effort to break the impasse and make the ceasefire permanent, but with many demands on the table, the temporary truce could be extended by another two or three days, the ABC reports.

Israel has indicated it is open to the extension but Hamas has cautioned that no such agreement has been reached.

Israeli prime minister Benjamin Netanyahu told reporters in Jerusalem he saw a chance for "important parties in the Middle East to be able to fashion a new reality" he thought might yield a "sustainable peace or at least a sustainable quiet that can lead to other things".

Hamas, in control of Gaza since 2007, has ruled out giving up its weapons, and a senior official earlier threatened to quit the talks, demanding the blockade of Gaza be lifted and prisoners held by Israel freed.

US President Barack Obama has said there are formulas available for achieving a more durable truce, but they required risks being taken by political leaders on both sides.

He said trust needs to rebuilt, which was difficult after a period of violence.

In his first comments since the 72-hour truce began, Mr Netanyahu blamed Hamas for all of the civilian casualties, saying it had used civilians as human shields.

The Palestinian delegation at the Cairo talks includes negotiators from Hamas, as well as members of Islamic Jihad and the Palestinian Authority and its demands include the end of Israel's blockade of Gaza, in place since 2007, and the opening of border crossings. The Palestinians also want internationally funded reconstruction.

More than 1,800 Palestinians, mostly civilians, and 67 Israelis, mainly soldiers, have died in the conflict.