A German court has dropped bribery charges against Formula One boss Bernie Ecclestone and ruled he can make a controversial $US100 million payment to settle the case.

In a move that is likely to see him stay at the helm of the lucrative sport, the 83-year-old Briton struck an accord with prosecutors on the record payment which then got the Munich tribunal's blessing, AFP reports. 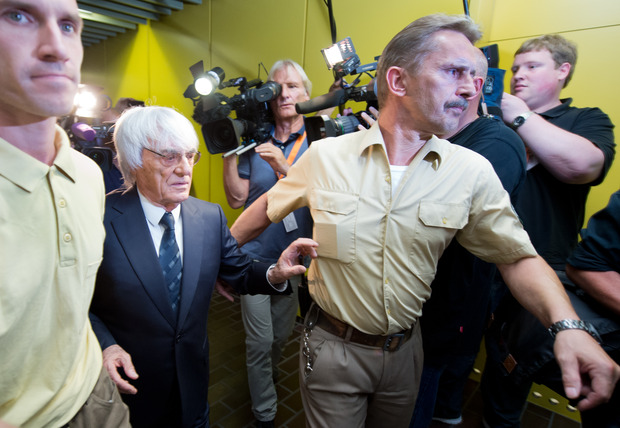 The businessman has a fortune estimated at $US4.2 billion, according to Forbes magazine, making him one of the richest 400 people in the world.

Presiding judge Peter Noll said $US99 million of Ecclestone's payment would go to the Bavarian state coffers and $US1 million would be donated to a child hospice foundation.

The accord is believed to be the largest of its kind in German history.

The magnate went on trial in the southern city of Munich in April on charges of paying a $US44 million bribe to a Bavarian state bank executive for help in maintaining his four-decade grip on Formula One.

A settlement is allowed in German criminal cases if the prosecution, the aggrieved parties and the court agree, but the Ecclestone deal has stoked fierce criticism.

The judges based their decision on a determination that a conviction was "not particularly likely" given the evidence presented.

The court added in a statement that Mr Ecclestone's "advanced age, health condition, the significant burden of taking part in hearings in a foreign country and the subsequent language barrier as well as the public attention directed at him" were also decisive factors.

Under the terms of the agreement, Mr Ecclestone will not have a criminal record and should be able to retain his control of the multi-billion-dollar Formula One empire.

News of the accord drew angry condemnation of a legal system some said gave special dispensation to the rich and famous.

However the businessman's lawyers hit out at accusations that he had orchestrated a "buying out" of German justice.

"This abandonment of the proceedings indicates that (based) on an unbiased, objective and independent assessment of the main proceedings after more than 100 hours of evidence" before the court, they said in a statement, "a conviction of Mr Ecclestone could not be expected with any likelihood".

The proceedings were scheduled to last at least until October.

The Formula One boss denied any wrongdoing but could have faced a jail term of up to 10 years if found guilty.