A seven-hour pause in Israel's bombardment in parts of Gaza is underway, but Palestinians immediately accused the Israelis of breaking the ceasefire by bombing a house in Gaza City, killing an eight-year-old girl and wounding 29 people.

A health ministry spokesperson says the strike on a house in Shati camp took place after the truce was scheduled to start at 10am (local time) on Monday, Reuters reports.

Brigadier General Yoav Mordechai said the ceasefire would apply to all of the Gaza Strip except eastern Rafah, where Israel will fight back if attacked. 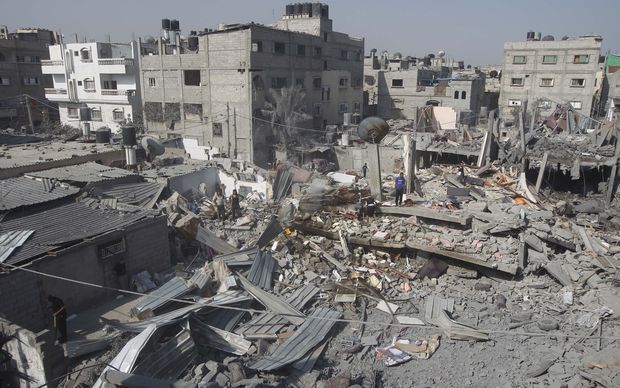 Palestinians inspect the wreckage of a building hit in an Israeli air strike in Rafah, in the southern Gaza Strip. Photo: AFP 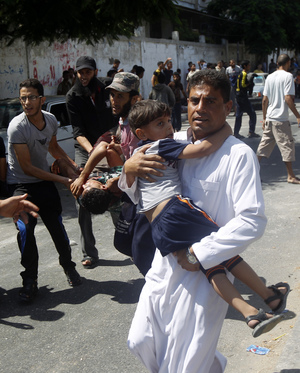 Injured people are carried from the scene of an Israeli strike on a UN school in Rafah. Photo: AFP

The ceasefire follows United Nations Secretary-General Ban Ki-moon's condemnation of a deadly attack on a UN school in southern Gaza as a moral outrage and a criminal act. At least 10 people were killed queuing for food and dozens wounded in the shelling on Sunday, the BBC reports.

The attack hit the entrance of the facility in Rafah, which had been sheltering more than 3000 displaced people.

Mr Ban said the Israeli defence force had repeatedly been informed of the location of such sites.

The Israeli government said if Palestinian militants are turning the vicinities of schools into war zones, they should be held accountable, the BBC reports.

The Israeli military has said it targeted three militants from the Islamic Jihad group on a motorbike near the school, though the group has not reported any of its members killed or injured.

The head of UN operations in Gaza, Robert Turner, says the Israeli army had been informed 33 times the school is being used as a shelter, and what its exact location is - the last time just an hour before the missile strike.

The latest exchanges came after Israel's military said an officer it feared had been captured had now been confirmed dead. Hadar Goldin went missing on Friday near Rafah.

Confirmation of 2nd Lt Goldin's death means 66 Israelis had died in the fighting, all but two of them soldiers. A Thai worker in Israel also died.

The latest official figures from Gaza's health ministry say 1800 Palestinians, most of them civilians, have been killed and more than 9000 injured since the conflict began nearly four weeks ago. Sixty-six Israelis have died, all but two of them soldiers.