A huge fire at an oil depot in Libya's capital has burned out of control and spread to a second tank. 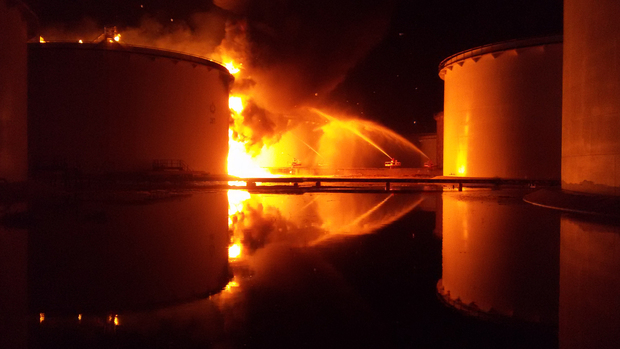 A huge fire near Tripoli airport in Libya has spread to a second fuel tank, despite firefighters' efforts. Photo: AFP

The government has blamed clashes between rival militias for igniting the blaze at the depot in Tripoli and said it could could cause a humanitarian and environmental disaster.

The government has urged residents living within 5km of the blaze to evacuate their homes, the BBC reports.

"They're the ones in immediate danger," the BBC's Rana Jawad said.

"From where we are, and that's about 15km away, if I stand on the roof, you can see in the distance black smoke really billowing across Tripoli's skyline. For a lot of people who live closer to it, that's a very scary scene." 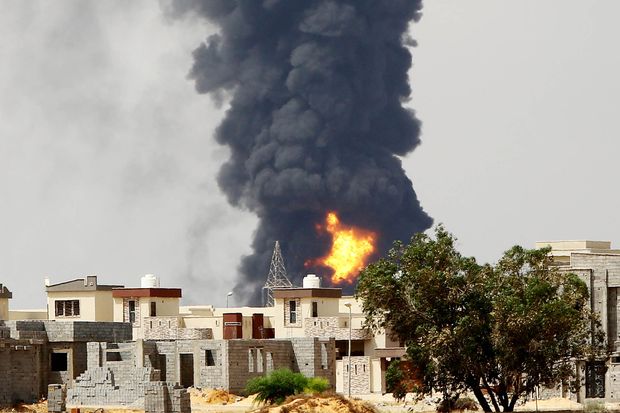 The government has urged residents living within 5km of the blaze in Tripoli to evacuate their homes. Photo: AFP

Firefighters almost managed to put out the blaze when it took hold of a first tank but had to withdraw after fighting resumed in the area, a Libyan oil company spokesman told the BBC.

At least 97 people have been killed in fighting between rival militia groups battling for control of Tripoli's main airport in the past week.

The fuel storage site, which is owned by oil and gas company Brega, is the main hub for the petrol distribution in the city.

It is located on the main airport road, where much of the fighting of the past two weeks between rival militias has been taking place.

Officials have called on the militias to cease fire in order to allow firefighters to do their job.