Russia says the United States is guilty of an international smear campaign, designed to influence international opinion against Moscow through falsehoods and propaganda.

The foreign ministry in Moscow said it rejects "unfounded public insinuations" from the US government.

But the Pentagon said on Friday that it had evidence to suggest Russia is preparing to transfer more sophisticated multiple-launch rocket systems to Ukrainian separatists in the very near future, the BBC reports.

A spokesperson said it was not clear whether Russian operators of the launchers might cross the border as well.

He says there had been a continuous flow of weapons and equipment from Russia to Ukraine during the past weeks, including a column of more than 100 vehicles.

The row comes as more bodies of victims from flight MH17, which crashed in Ukraine, arrived in the Netherlands.

The separatists have been accused of shooting down the Malaysia Airlines plane.

The US says it believes the rebels shot down the passenger jet with a Russian-provided SA-11 Buk surface-to-air missile, probably by mistake.

Russia has frequently denied sending heavy weapons into Ukraine but rebel leaders have given conflicting accounts of whether they had control of a Buk launcher at the time the plane was downed.

A Russian security official says up to 40 mortar shells fired by Ukrainian forces have fallen on the Russian province of Rostov near the border with eastern Ukraine, where Kiev is fighting pro-Russian separatists.

Both Moscow and Kiev have accused the other of shooting across the border, and Ukraine says missiles shot from Russia may have downed two of its fighter jets this week.

Earlier, a US state department spokesperson said there was also evidence Russian troops were firing on Ukrainian soldiers from within Russia.

The US Ambassador to NATO, Douglas Lute, has told a security forum there are now about 15,000 Russian troops amassed along the Ukraine border.

But in a statement, Russia's foreign ministry said the US was pushing "anti-Russian cliches" to protect their allies in Kiev by obscuring the "real reasons" for events in Ukraine.

The fighting that erupted in eastern Ukraine in April is believed to have claimed more than 1000 lives. 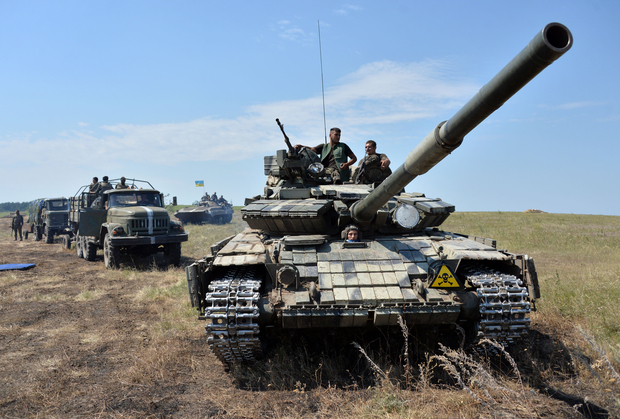 A Ukrainian convoy heads to Lysychansk in the rebel-held east. Photo: AFP