At least two Palestinians have been killed and scores wounded in the West Bank during a protest against Israel's military campaign in Gaza that has seen the death toll climb above 800.

The Israeli military confirmed that troops used "riot dispersal means" after the protesters threw rocks and blocked a road with burning tyres on Thursday.

The protests came after 16 Palestinians and United Nations staff were killed when a UN school at Beit Hanoun in the northern Gaza strip and designated as a shelter came under fire. About 200 people were wounded. 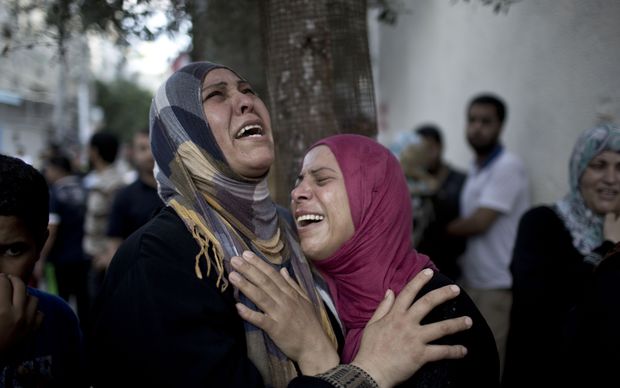 Distraught relatives outside a hospital morgue following the attack on the UN-run school Photo: AFP

UN Secretary-General Ban Ki-moon expressed his horror at the attack. "Many have been killed - including women and children, as well as UN staff," Mr Ban said in a statement. "Circumstances are still unclear. I strongly condemn this act."

A spokesman for the UN relief agency said it had tried in vain to arrange an evacuation of civilians from the school with the Israeli army, and noted reports of Hamas rockets falling in the area at the same time.

Scores of crying families who had been living in the school ran with their children to a hospital where the victims were being treated a few hundred metres away, Reuters reports.

It is the fourth time a UN facility has been hit in Israel's offensive against Hamas militants.

The charity Save the Children condemned the attack and said a child is losing his or her life in Gaza every hour. 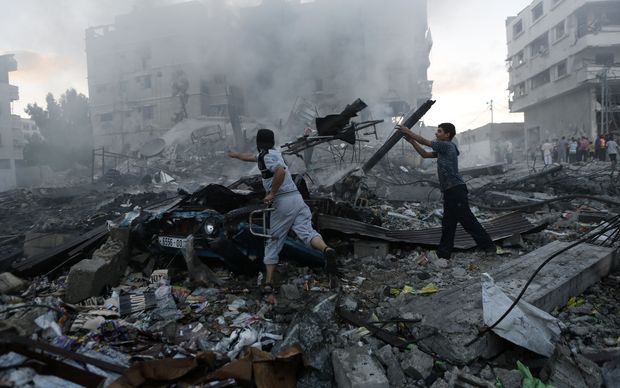 The number of Palestinians killed during the Israeli offensive in Gaza has risen above 800 - most of them civilians, while 33 Israelis have died.

Palestinian rockets and mortar bombs have also killed three civilians in Israel. Such attacks surged last month as Israel cracked down on Hamas in the occupied West Bank, triggering the 8 July air and sea barrage on the Gaza Strip that escalated into an invasion a week ago.

The Israeli military said its troops were fighting gunmen from Hamas, which runs Gaza, in the area and that it was investigating the incident.

More than 140,000 Palestinians have fled the fighting between Israel and Gaza militants, many of them seeking shelter in buildings run by the UN Relief and Works Agency (UNRWA). Israeli forces are trying to stop militants from Hamas and their allies from firing rockets into its territory.

Hamas leader Khaled Meshaal said on Wednesday his fighters had made gains against Israel and voiced support for a humanitarian truce, but only if Israel eased restrictions on Gaza's 1.8 million people. Hamas wants next-door Egypt to open up its border with Gaza too.

Britain called on Gaza's rulers to accept a truce unconditionally.