US Secretary of State John Kerry has laid out what he says is overwhelming evidence of Russian complicity in the shooting down of Malaysia Airlines flight MH17 over Ukraine.

Mr Kerry said it was quite clear that the missile system used to bring the plane down had been transferred directly from Russia. 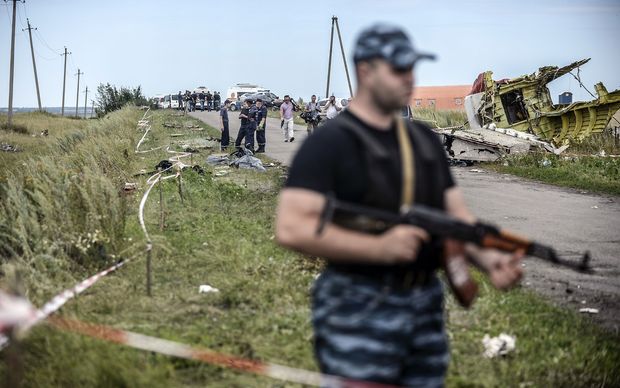 Malaysia Airlines flight MH17 was brought down on Thursday by what is believed to have been a surface-to-air missile, killing all 298 passengers and crew. The Boeing 777 was flying from Amsterdam to Kuala Lumpur.

Moscow denies involvement in shooting down the airliner and has blamed the Ukrainian military. But Washington and its allies point the finger at the pro-Russian separatists who have Moscow's backing and have been accused of obstructing access to the crash sites.

Mr Kerry said the United States had seen supplies moving into Ukraine from Russia in the last month, including a 150-vehicle convoy of armoured personnel carriers, tanks and rocket launchers given to the separatists.

Three days after the downing of the airliner in a rebel held area of eastern Ukraine, local emergency services say 196 bodies have been recovered, Reuters reports.

A spokesperson for the European observers in the area, Michael Bociurkiw, said most of the bodies have been loaded on to rail wagons in the nearby town of Torez.

He said the observers were allowed to check the wagons and saw dozens of body bags which were numbered so they so they can be examined by investigators before being sent home for burial.

Pro-Russian separatists also say the black box flight recorders have been found and have been taken to the regional capital of Donetsk where they remain in rebel hands.

Meanwhile Britain, Germany and France have agreed they should be ready to increase sanctions on Russia over the downing of a Malaysian jet when European foreign ministers meet in Brussels.

A statement from the British Prime Minister David Cameron said the European Union must reconsider its approach to Russia and be ready to impose further sanctions.

The leaders of the three countries also agreed to press the Russian President Vladimir Putin to ensure investigators had free access to the crash site.