Israel says it has expanded its ground operation against Hamas, with residents in Gaza reporting the heaviest shelling since the conflict began 13 days ago.

In a statement, Israel's military said "additional forces" had joined "the effort to combat terror" in Gaza.

Four Palestinians died, including two children and the son of a senior Hamas official, in new air strikes on Sunday. 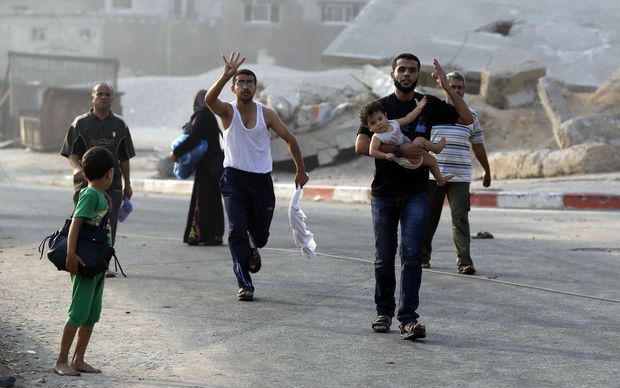 His visit is part of a regional tour aimed at helping Israelis and Palestinians "end the violence and find a way forward", the UN said.

But BBC reports the death toll continued to rise at the weekend, with the number of Palestinians killed now at more than 350 - the vast majority of them civilians, the UN says.

Israel says the ground operation is necessary to target a Hamas tunnel network, which it says it could not do only from the air.

Two Israeli soldiers were killed on Saturday during a gunfight with Palestinian militants who had used tunnels to cross into Israel to launch an attack, the IDF said.

Lieutenant Colonel Peter Lerner, an IDF spokesman, said the ground offensive was being expanded "to restore security and stability to Israel's residents and citizens".

Residents in Gaza reported hearing explosions throughout the night on Saturday.

An air strike in the suburb of Shejaiya targeted the house of Hamas official Khalil al-Hayya, killing four people including his son and daughter-in-law, Palestinian doctors said.

Meanwhile, the United Nations warned that it was running out of supplies to help more than 50,000 Palestinians who have sought shelter at its schools in Gaza.

A UN official said the number of people fleeing was much higher than expected, with both the Israeli and Egyptian borders closed to Gazans.

Diplomatic efforts to secure a ceasefire involving, among others, Egypt, Qatar, France and the UN, have failed to make any progress.