The United States is leading demands for all sides in the Ukranian conflict to support an immediate ceasefire to allow an investigation into the downing of a Malaysian Airlines jetliner. 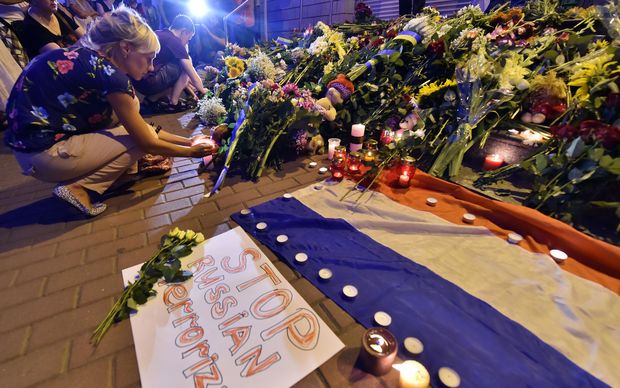 A woman lights a candle in front of the Embassy of the Netherlands in Kiev for those on MH17 in eastern Ukraine. Photo: AFP

The United States believes a surface-to-air missile hit the Boeing 777 over eastern Ukraine as it flew from Amsterdam to Kuala Lumpur early Friday morning.

It came down in farmland near the town of Shaktarsk in the Donetsk area, a stronghold of pro-Russian rebels near the border with Russia. All 298 on board have been killed.

One American official said Washington strongly suspects the missile was fired by Ukrainian separatists backed by Moscow and there is no evidence to suggest it came from Ukrainian forces. 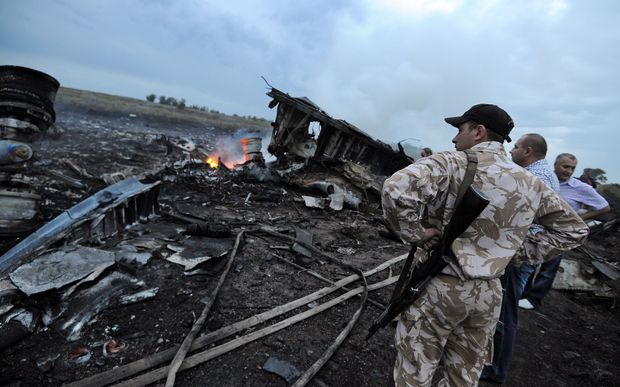 Pro-Russian rebels have been fighting government forces in the region where the plane crashed and Ukraine officials have accused the rebels of shooting it down.

The separatists are believed to have downed two Ukrainian military planes over the region in recent days but they have denied shooting flight MH17, which had been due to enter Russian airspace when contact was lost.

Russia and Ukraine blame each other

Russian President Vladimir Putin said Kiev bears full responsibility for the crash, and Ukraine's crackdown on separatist rebels has stoked tensions that led to the disaster.

He has called for a "thorough and unbiased" investigation. Pro-Russian separatists have also agreed to provide assistance in an investigation into the downing of the plane.

The Organisation for Security and Cooperation in Europe said the separatists will ensure safe access for international experts visiting the site.

Ukraine's president Petro Poroshenko called the loss of the plane an "act of terrorism".

A rebel leader, Aleksandr Borodai, blamed the Ukrainian air force for shooting down the airliner, but Ukraine categorically denied it was responsible.

Both the plane's so-called black box flight recorders have been found, the first by separatists and the second by rescue teams. 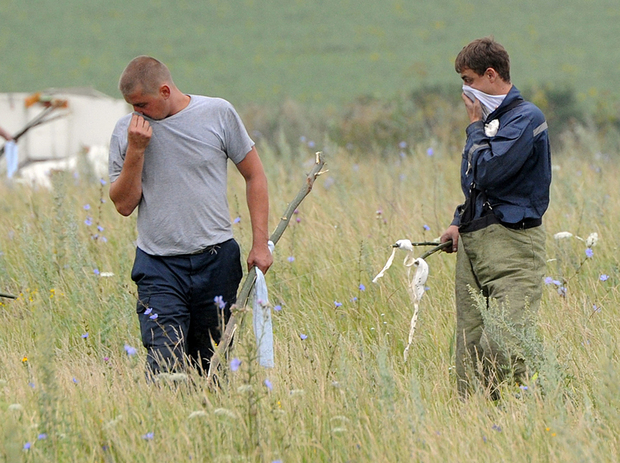 The search for bodies at the site of the Malaysian airliner crash in eastern Ukraine. Photo: AFP

An emergency services rescue worker has reported that at least 100 bodies have so far been found at the scene, with debris spread across an area 15 kilometres.

A BBC reporter said there is blood spattered everywhere and human remains are scattered widely.

Al Jazeera reporter and New Zealander Alexi O'Brien who is also at the scene told Checkpoint that children's toys and tourist books littered around, which is a reminder that many of the passengers were heading away on a holiday.

Black day for the Netherlands

Dutch Prime Minister Mark Rutte said it's a black day for his country and the whole of the Netherlands is in mourning.

More than half the passengers on Malaysia Airlines flight MH17 were Dutch. The plane was four hours into a flight from Amsterdam to Kuala Lumpur when it disappeared from radar early Friday morning. 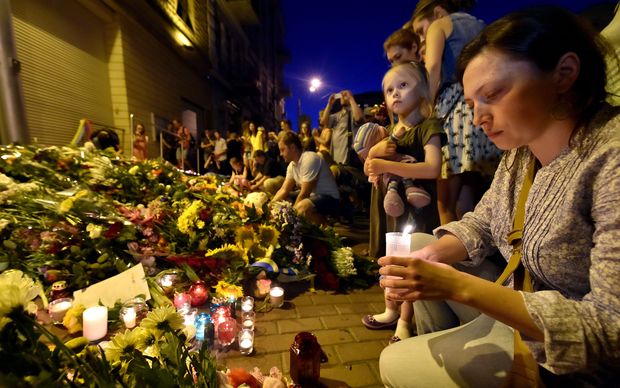 A woman lights a candle in front of the Embassy of the Netherlands in Kiev, Ukraine. Photo: AFP

Mark Rutte has ordered that flags fly at half-mast on government buildings across the country for what he said might be the worst air disaster in Dutch history. 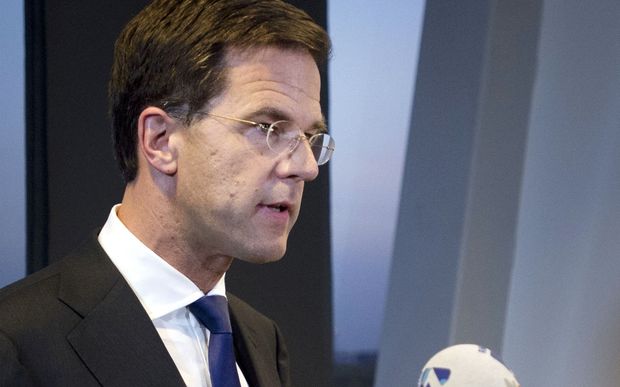 Flight MH17 was operating as a code-share flight with the Dutch flagship carrier KLM.

Malaysia's Prime Minister Najib Razak spoke of his shock and said he was launching an immediate inquiry into the crash. 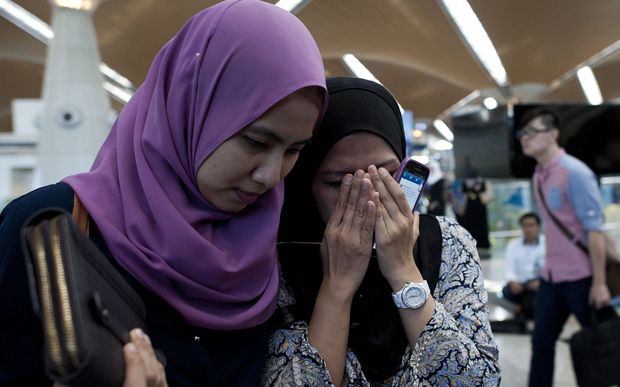 Relatives of a passenger who was on board flight MH17 react over the news at Kuala Lumpur Airport Photo: AFP

It is the second disaster suffered by Malaysia Airlines this year.

Flight MH370 disappeared en route from Malaysia to China in March and still has not been found. 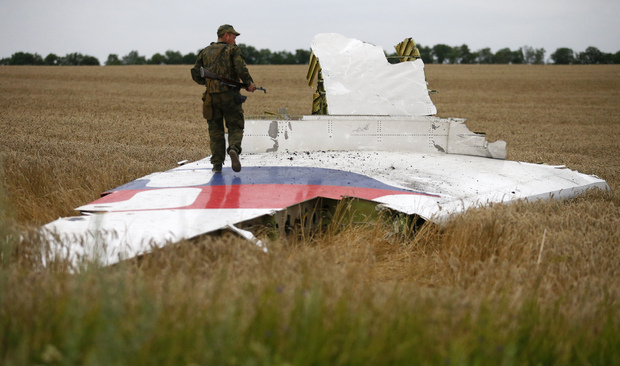 A pro-Russian separatist stands on part of the plane debris. Photo: REUTERS

A witness called Vladimir told Reuters "I was working in the field on my tractor when I heard the sound of a plane and then a bang and shots.

"Then I saw the plane hit the ground and break in two. There was thick black smoke."

A separatist rebel from nearby Krasnyi Luch who gave his name as Sergei said: "From my balcony I saw a plane begin to descend from a great height and then heard two explosions." 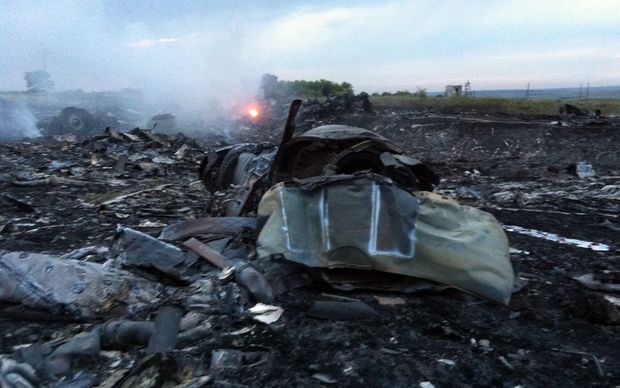