A city train has derailed in the Russia's capital of Moscow during rush hour, killing 21 and injuring scores more. 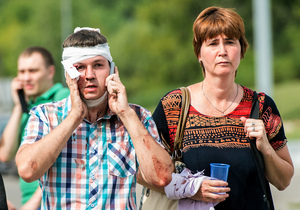 Some of those hurt were carried out of the tunnel on stretchers, with the most serious cases flown to hospital on Tuesday, the BBC reports.

The cause of the crash is reported to be a power surge, which prompted the train to stop abruptly.

It is one of the most serious incidents in the history of the metro, one of the world's oldest underground railways.

The train derailed between Slaviansky Boulevard and Park Pobedy (Victory Park) stations in the west on the city.

Some 50 people were in a serious condition, the Itar-Tass news agency reported, quoting a health official.

President Vladimir Putin has ordered a criminal investigation into the accident.

Park Pobedy is the deepest metro station in Moscow, 84 metres underground, which made the rescue operation particularly hard.

The BBC reports the tunnel where crash happened was built about 10 years ago. Critics accuse the authorities of spending too much on extending the metro system, and not enough on maintenance.