Typhoon Neoguri has slammed into the Japanese mainland bringing widespread flooding, ripping trees from their roots and leaving houses half-buried under mud, as tens of thousands were urged to seek shelter.

The storm, which has left several people dead and a string of damage in its wake, caused havoc on Thursday in many small communities as residents struggled to keep waves of dirty water from destroying their homes. 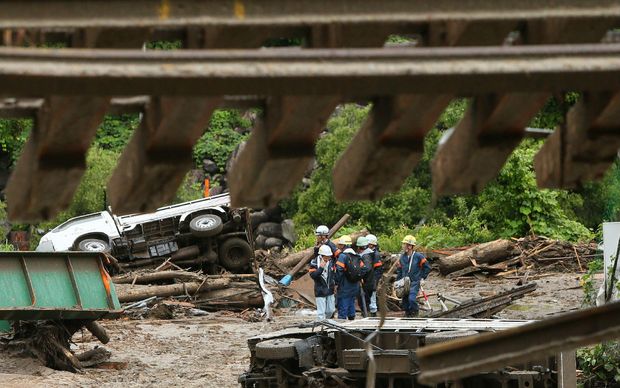 Workers at the site of a landslide caused by the typhoon at Nagiso town in Nagano prefecture. Photo: AFP / Jiji Press

More than 500 houses in several prefectures were flooded due to the typhoon and heavy rain, according to public broadcaster NHK, with about 130,000 households urged to seek shelter.

A dramatic government video of a mudslide in the town of Nagiso swallowing a house with a 12-year-old boy inside has been played repeatedly during round-the-clock news coverage.

Officials warned over the risk of flooding and landslides as powerful winds and torrential rain batter the archipelago nation, with local authorities urging half a million people to seek shelter in Okinawa earlier in the week, AFP reports.

Neoguri hit the mainland on Thursday morning near Akune City on the southern main island of Kyushu, which is home to 13 million people and lies next to the country's biggest island of Honshu where major cities including Tokyo and Osaka are located.

The typhoon had crossed Kyushu by late morning and was forecast to make a landfall on Honshu by Friday.

Neoguri's slowed somewhat overnight, now packing gusts of up to 126km/h as it moved east at 25km/h.

Nearly 50 people have been injured, officials and reports said, while as many as five deaths have been directly or indirectly linked to the typhoon.

More than 190 flights were cancelled while the government was expected to hold a disaster-management meeting over how to protect against the force of nature.

The typhoon is likely to reach areas near the tsunami-crippled Fukushima nuclear power plant by Friday morning. The site's operator said workers were bracing for the storm.

By Thursday morning, police and municipal officials said two elderly men were found dead in irrigation ditches in the northeastern and southwestern part of the country. A 62-year-old man knocked off his boat in rough waters in southwestern Kochi Prefecture, while NHK said an 81-year-old fisherman died in Kumamoto prefecture on Kyushu.