A human rights lawyer says the Australian government may be committing piracy by holding 153 asylum-seekers on a customs boat on the high seas.

After weeks of silence, the Government on Tuesday confirmed to the High Court the group, which includes children as young as two, was in custody on the boat. 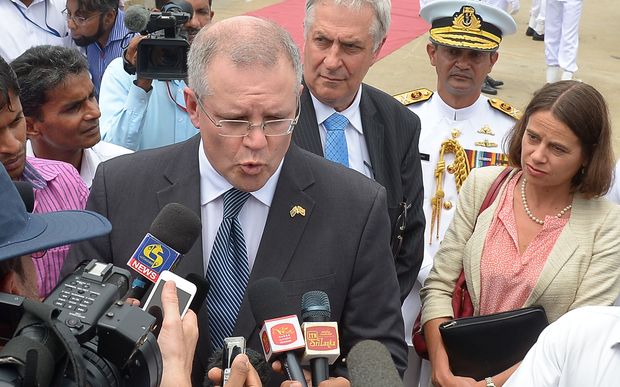 Julian Burnside, QC, says the Sri Lankans went onto the boat thinking that they were being offered help, the ABC reports.

"It looks for all the world like piracy," Mr Burnside said. "If they went onto the Australian vessel because they had asked for help and they were offered help, then they seem to have been taken under false pretences because the Government not only publicly denied their existence it also seemed distinctly uninclined to offer them any help."

The asylum seekers say they are Sri Lankan but left from India about a month ago.

Sri Lanka has indicated it will not take them back and Mr Burnside thinks India would be unlikely to. "Because India of course is not a signatory to the refugees convention," he said.

Immigration Minister Scott Morrison is still refusing to give any details about his plans for the group.

"The resolve of the Australian and Sri Lankan governments to stop people smuggling is stronger and greater than the people smugglers," he said from Sri Lanka.

"To anyone here who may think of getting on a people smuggling voyage to Australia: don't believe the lies that the people smugglers tell you."

Mr Morrison was in Sri Lanka for the commissioning of two Australian-gifted naval patrol boats that will be deployed for preventing people smuggling operations. It is understood Mr Morrison also visited the war-torn region of Jaffna while he was visiting the South Asian nation.