Eduard Shevardnadze, an ex-president of Georgia and former Soviet foreign minister, has died after a long struggle with illness, his personal assistant says. 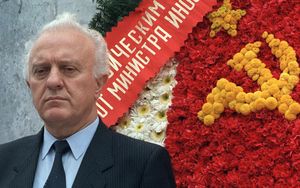 Eduard Shevardnadze on a visit to Mexico in 1986. Photo: AFP

Russia's Interfax news agency reported that he had died at midday on Monday (local time).

The 86-year-old played a vital role in ending the Cold War as Soviet foreign minister in 1985 and in 1992 went on to lead his native Georgia in the stormy early years after independence.

As foreign minister under the last Soviet leader Mikhail Gorbachev, Mr Shevardnadze oversaw the thaw in relations with the West before the Berlin Wall came down and the communist Soviet Union was dismantled, Reuters reports.

He was one of the intellectual fathers of "perestroika" (restructuring), the reform policy which Mr Gorbachev said was conceived during a stroll along the shores of the Black Sea with his Georgian comrade, although they later fell out.

After the Soviet Union collapsed, Mr Shevardnadze returned to Georgia to become president and brought some stability to the republic after a period of anarchy, when protesters toting Kalashnikovs prowled the streets. He was toppled in the country's Rose Revolution in 2003.