Australia has acknowledged it has returned a boatload of asylum-seekers to Sri Lankan authorities at sea on Sunday. Police say they are to be charged with leaving the country illegally.

The admission follows concerns that more than 200 Sri Lankans may have been handed over earlier, many of them Tamils who say they face persecution at home. 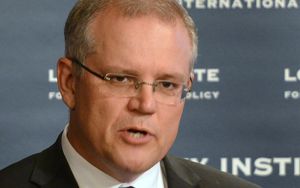 Border patrol personnel intercepted the vessel west of the remote Cocos Islands last week after they were suspected of entering Australian waters illegally.

Sri Lankan police said on Monday that they are to be charged with leaving the country illegally and those found guilty face rigourous imprisonment.

Rights groups and some Western countries have raised concerns with Sri Lanka over alleged human rights violations during the final phase of the war against Tamil separatists that ended in 2009.

It is the first time the Australian government has confirmed it has intercepted people at sea, screened them and returned them to their country of origin, the BBC reports.

Immigration Minister Scott Morrison acknowledged on Monday that 41 people had been handed back to Sri Lanka, while not commenting on the fate of a second boat reportedly carrying about 150 people.

Mr Morrison said they were transferred at sea just outside the Sri Lankan port of Batticaloa on Sunday. "All persons intercepted and returned were subjected to an enhanced screening process," he said.

The government said only four of those returned on Sunday were Tamils. Mr Morrison said that only one person may have had a case for asylum, but he chose to return voluntarily with the rest of the passengers.

Sri Lankan officials said the group would be taken to the port of Galle and handed over to police to be investigated.

"Requests for international protection should be considered within the territory of the intercepting state, consistent with fundamental refugee protection principles," it said.

"International law prescribes that no individual can be returned involuntarily to a country in which he or she has a well-founded fear of persecution."