The armed wing of the Palestinian militant group Hamas said six of its fighters died in a single strike near Rafah in the south. Three others died in separate Israeli air strikes in response to rocket and mortar fire on Israel. 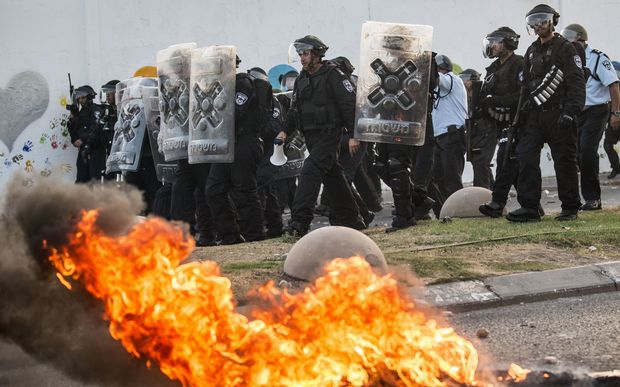 Israeli riot police secure a street during clashes with Palestinian protesters at the weekend. Photo: AFP

Tensions in the region are high following the killing of Palestinian teenager Mohammed Abu Khdair, 16, whose death has sparked violent protests.

Police have arrested what they describe as six Jewish suspects. They said the teenager, abducted last Wednesday and found dead hours later, was killed "because of his nationality", according to the BBC. He had reportedly been burnt to death.

Mohammed Abu Khdair's death followed the killing of three Israeli students in the occupied West Bank. Their bodies were found a week ago and Khdair's family believe he was murdered in revenge.

Israel's Shin Bet security agency issued a brief statement confirming the arrests and said the suspects were being questioned at one of its facilities. The agency did not comment on any possible motive for the killing and said details of the case were subject to a judicial gagging order.

Thousands attended Mohammad Abu Khdair's funeral on Friday near the family's home in the Shufat district of East Jerusalem, and hundreds of Palestinian youths clashed with Israeli police in East Jerusalem before and after the funeral. 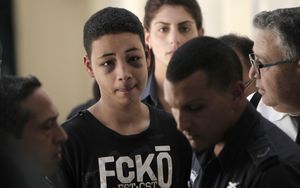 The teenager was Tariq Khdair, a 15-year-old Palestinian-American, who is also a cousin of Mohammad Abu Khdair. He was bailed after appearing in court on Sunday, accused of attacking police officers during the unrest.

Mohammad Abu Khdair was seen being forced into a car in Shufat early on Wednesday and his body was found later in a forest in West Jerusalem.

A post-mortem examination was carried out by Israeli doctors, with a senior Palestinian medical official in attendance. The examination results have not yet been released.