Ukraine's president has hailed the recapture of the rebel stronghold of Sloviansk as the start of a turning point in the three-month conflict.

Ukrainian Government forces have made territorial gains since launching an offensive this week in Donetsk and Luhansk regions, following the breakdown of a ceasefire.

But Sloviansk had been considered a focal point of the rebellion, and was the military centre of the self-declared People's Republic of Donetsk. 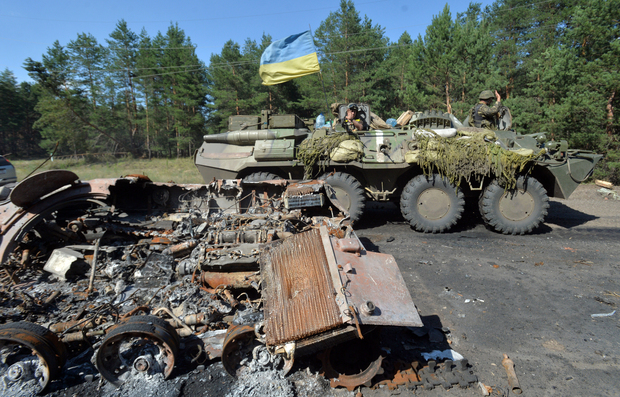 A Ukrainian armoured personnel carrier drives past a burned armoured vehicle which was used by pro-Russian militants near Sloviansk. Photo: AFP

"This is not a complete victory yet, and it is not the time for fireworks displays," Mr Poroshenko said in a televised address.

"But the cleansing of Sloviansk from gangs who are armed to the teeth is of huge symbolic importance. This is the start of a turning point in the fight against the militants."

Ukrainian officials said the military was now in Sloviansk, and promised humanitarian aid would be delivered soon.

The rebels left the city after a night of mortar shelling in a move apparently orchestrated by the breakaway region's military commander, Igor Strelkov. 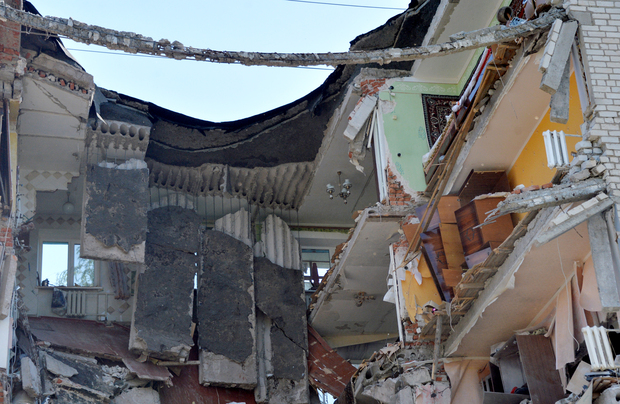 Damage caused by shelling is seen on a building after Ukrainian forces over-whelmed pro-Russian militants in the small eastern Ukrainian city of Nikolayevka, near Sloviansk. Photo: AFP

A rebel spokesman said their forces would abandon the entire "northern sector" and pull back to Donetsk city.

The Ukrainian government had earlier claimed to have retaken two small towns.

And other reports said Kramatorsk city, near Sloviansk, had also been recaptured.

The BBC reported that the retaking of Sloviansk and raising of the Ukrainian flag over city hall was by far the most significant of the Government's victories so far.

The city was not just a command centre for the insurgency - it was a symbol of the militants' continuing ability to thwart Kiev's attempts to reassert control in the east.

But it noted that though the insurgents appeared to be also evacuating Kramatorsk, another key city, there was a question of whether this was a turning point in the war, or merely a shifting of the battlefield.

Though the rebels were in tactical retreat - typically a euphemism for a defeat - Donetsk it could still present a major military challenge to government forces.

It could also convince the rebels to engage in ceasefire talks more actively - if only to buy more time.