The prime minister of Iraq, Nouri al-Maliki, says he will never give up his quest for a third term in power.

It comes as pressure both inside and outside Iraq continues for Mr Maliki to step down.

His alliance of parties won the largest number of seats in the recent general election but he's seen by many as having exacerbated the crisis in Iraq, the BBC reports. 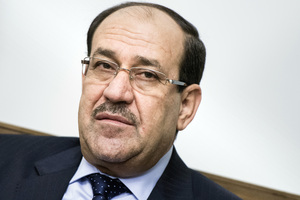 Mr Maliki has come under mounting pressure since militants of the group now calling itself the Islamic State - formally Islamic State in Iraq and Syria (ISIS) - rampaged through swathes of the country and declared a mediaeval-style caliphate on land they've captured in Iraq and neighbouring Syria.

In a statement read out by a television announcer, Mr Maliki said he would remain a soldier, defending the interests of Iraq and its people, in the face of what he called terrorists and their allies.

He was referring to the Islamic State and some of the most prominent armed Sunni groups who have taken control of large parts of majority-Sunni regions of Iraq.

Mr Maliki's statement will complicate the struggle to form a new government to unite the ethnically and religiously divided country, something parliament has failed to achieve.