The funerals of three teenagers who were abducted and murdered while hitch-hiking in the occupied West Bank have been held in Israel,

Israel has blamed the Palestinian militant group Hamas for the deaths. Hamas has denied any involvement. 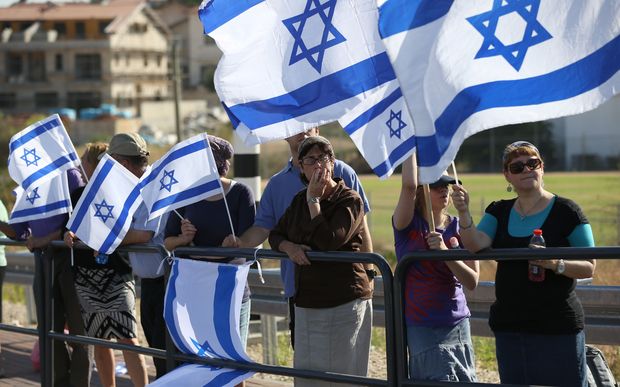 Israeli mourners hold their national flags along a road near the Hashmonaim Jewish settlement in the West Bank. Photo: AFP

The youths' bodies were found on Monday evening, more than two weeks after the trio went missing.

Mr Netanyahu has said Hamas will be made to pay a price for the killings.

Speaking at the joint funeral held for Naftali Frenkel, Gilad Shaar and Eyal Yifrach in central Israel, Mr Netanyahu said "a broad moral gulf separates us from our enemy. They sanctify death, we sanctify life".

The funeral took place at Modein cemetery in central Israel. Modein, which is between Tel Aviv and Jerusalem, is close to the boys' family homes.

Overnight, Israel launched more than 30 air strikes on facilities linked to militant groups in the Gaza Strip after 18 rockets had been fired into Israel since Sunday night, the Israeli military reported.

The teenagers' bodies were found under a pile of rocks near the Palestinian town of Halhul. An Israeli official said it appeared the youths had been shot soon after their abduction.

Their disappearance on 12 June sparked a huge search operation in Palestinian towns and cities across the West Bank.