The sister of the newly-crowned King Felipe of Spain has been named as a suspect in a corruption investigation. 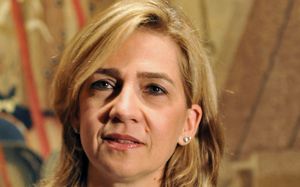 The judge leading the investigation believes Princess Cristina, 49, knew about the allegedly fraudulent activities of her husband, who is accused of embezzling millions of euros of public funds.

She could now end up facing criminal charges in court.

Her husband Inaki Urdangarin, a former Olympic handball player, is accused of using his connections to win public contracts to put on events through his non-profit organisation the Noos Foundation.

In a 167-page ruling, Palma Examining Magistrate Jose Castro said there was evidence that the couple had paid for dozens of personal items - from parking tickets to children's birthday parties to a trip to Rio de Janeiro - out of a shell company used to launder proceeds from the Foundation.

The couple, who have four children, deny any wrongdoing and their lawyers have indicated they will appeal.

The ruling from the court came barely a week after King Juan Carlos abdicated in favour of his son.