In Australia, wild weather has lashed much of New South Wales and Victoria and has left tens of thousands of homes without power on Wednesday.

The storm has brought strong winds, rain and even snow blizzards to much of the country's southeast.

The ABC has reported that storm surges have caused flooding in central Melbourne with the Yarra River bursting its banks in places.

Emergency services in Victoria said winds of up to 122 kph on Tuesday blew trees and debris onto roads, houses and cars and also brought down powerlines.

At one stage on Tuesday more than 77,000 homes were without power in the state.

Emergency crews in New South Wales were also working on Wednesday to restore power to about 12,000 homes, mainly in the Illawarra and on the South Coast. 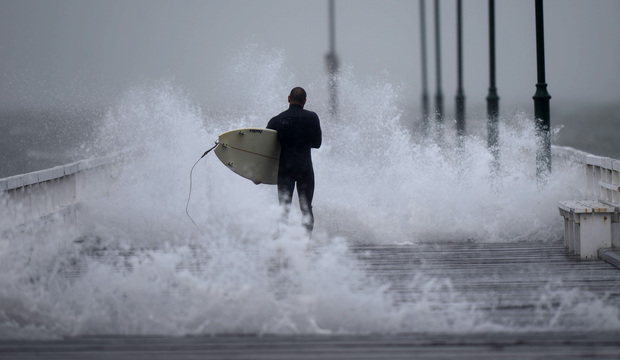 A surfer makes his way along the pier before jumping off into Port Phillip Bay as the storm lashes the Melbourne area. Photo: AFP