Islamist-led militants have reportedly taken control of most of Iraq's largest oil refinery at Baiji in the north.

A refinery official, speaking from inside the complex on Wednesday, said militants are in control of the production units, administration building and four watch towers which makes up 75 percent of the refinery. He said clashes are continuing near the main control room with security forces. 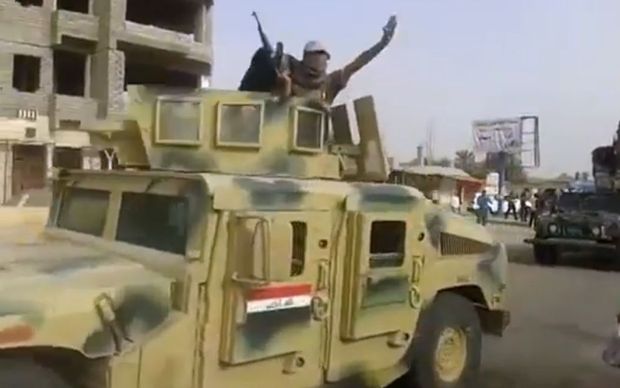 An image taken from a video put on YouTube on Tuesday allegedly showing ISIS militants parading with an Iraqi army vehicle in the northern city of Baiji. Photo: AFP / YouTube

Smoke billowed from a spare parts warehouse on the site at Baiji, 210km north of the capital Baghdad, security and refinery sources told Reuters. The attack began at 4am (local time) from outside two of the three main entrances to the sprawling facility.

On Tuesday, foreigners were evacuated from the refinery as security forces braced for an attack on the compound. The refinery has been under siege since Sunni militants began their major military offence in northern Iraq last week.

Meanwhile, fighting is continuing as government forces and Shia militias attempt to repel the advance of the Sunni militants.

The government is fighting to push back ISIS (Islamic State in Iraq and the Levant) and its Sunni Muslim allies in Diyala and Salahuddin provinces, after the militants overran the second city, Mosul, last week, the BBC reports.

Security forces have made new air strikes on militants advancing towards the capital and the Iraqi government says they have recaptured the citadel in the strategic town of Tal Afar. Fighting is also reported in the western city of Ramadi.

Prime Minister Nouri al-Maliki appeared on television with Sunni Muslim and Kurdish leaders on Tuesday to issue a call for national unity in the face of the advance - they demanded that non-state forces lay down their arms.

Saad Metalby, an MP from the ruling coalition, believes a militant attack on Baghdad would fail.

"Civilians and military are in a position to defend Baghdad. The attacking force does not have such numbers as to enter even close to Baghdad.

"Baghdad suburbs are cleared of all elements that we consider as sleeping cells," he said.