Sunni militants have routed Baghdad's army and seized the north of the country in the past week, threatening to dismember Iraq and unleash all-out sectarian warfare.

In a letter to Congress, Mr Obama said the 275 combat troops would protect US citizens at its embassy in Baghdad and remain there until the security situation improves.

But as the militant group the Islamic State of Iraq and Syria (ISIS) continues to make advances in Iraq, there is no sign when that might be, the BBC reports.

Mr Obama has met with his full national security team and ruled out sending in ground troops to fight, but air strikes remain a possibility.

Meanwhile, the Prime Minister of Iraq's autonomous Kurdish region says he doesn't believe the country will remain intact and it would be impossible for Iraq to return to the situation that existed before ISIS took control of the city of Mosul last week.

Natchervan Barzani said Sunni muslims feel neglected by the Shia dominated Iraqi government and a political solution rather than a military one is the only way forward.

Mr Barzani said Kurds would not be drawn into fighting the Sunni militants advancing through northern Iraq towards Baghdad.

He said the best option would be for the Sunni areas to follow the same path as the Kurds have taken - to declare autonomous regions. 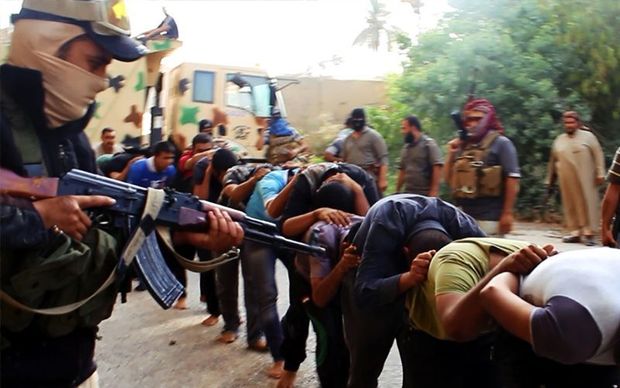 Sunni militants claim they have seized the Iraqi city of Tal Afar, near the Syrian border and are just 100km from Baghdad. "Major human rights violations" are reported.

Soldiers and policemen have fled the town, leaving their weapons behind them, the BBC reports. It is understood that ISIS militants and other armed groups then moved in and their black flag is now flying there. The jihadits are also reported to have taken control of the airport.

Tal Afar is home to approximately 200,000 people and lies between the city of Mosul and the border with Syria. It has a mixed Sunni and Shi-ite population. There are reports some of the Shi-ites have left too, fearing they could be targeted by the extremists in ISIS.

The militants captured key cities including Mosul and Tikrit last week, but some towns were retaken by government forces.

Meanwhile, officials at Iraq's biggest oil refinery says it's been shut down and foreign staff evacuated after militants have advanced into the town of Baiji and surrounded the refinery.

The officials say local staff remain in place and the military is still in control of the facility.

The United States has said it may use drone strikes to halt the militants. Secretary of State John Kerry said the advance of the ISIS forces was an "existential threat" for Iraq and American air strikes were one option.

"They're not the whole answer, but they may well be one of the options that are important," he said.

The Pentagon said US officials were also open to holding direct talks with Iran over Iraq, but there was "no plan to co-ordinate military activity" between the two countries.

Iranian President Hassan Rouhani earlier said he would consider co-operation if the US took action, according to the BBC.

The USS George HW Bush aircraft carrier has already been deployed to the Gulf, accompanied by two more warships. However, Washington said no US troops would be deployed on the ground.

Britain reiterated on Monday that it had no plans for military intervention in Iraq.