Ukraine's interior minister has said three tanks have crossed the border from Russia into rebel areas of the east and that fighting is under way.

The tanks entered Ukraine along with other armour through a checkpoint controlled by rebels in the Luhansk region, Arsen Avakov said.

The army engaged two of them and destroyed part of the column, he said. 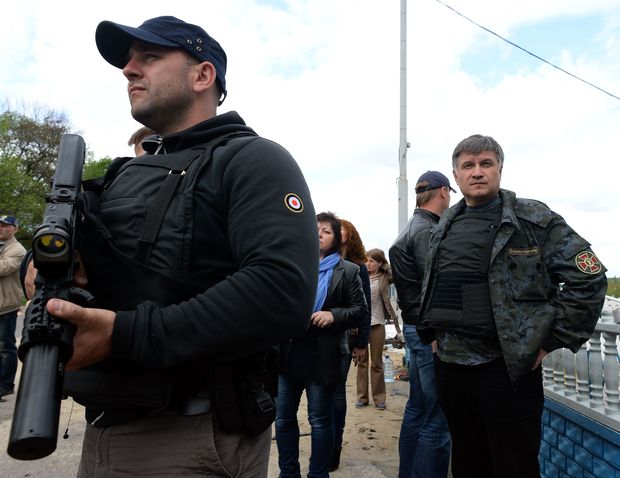 Ukrainian interior minister Arsen Avakov, right, looks on as he visits a checkpoint near the eastern Ukranian city of Slavyansk, May 2014. Photo: AFP

The BBC reported that Russia has rejected Mr Avakov's statement as "another fake piece of information".

Mr Avakov said the tanks had crossed the border from Russia along with armoured personnel carriers and artillery pieces in the Dyakove area of Luhansk region, before moving into the neighbouring Donetsk region.

There, Ukraine's interior minister said, the tanks headed for the town of Snizhne on Thursday morning. Two then proceeded to the town of Horlivka and were attacked by government forces.

"The fight is under way," Mr Avakov said. "I cannot say about its final outcome, but part of this column has been destroyed."

Unverified video has been posted on YouTube of a battle tank rolling down a street said to be in Snizhne. The footage was shot from a flat overlooking the street.

Meanwhile, the BBC has reported that Ukrainian President Petro Poroshenko, who was elected last month, and his Russian counterpart Vladimir Putin had a "substantial" conversation by phone on Kiev's plan of peaceful settlement in the east, Ukraine's presidency said in a statement.

Mr Poroshenko said that it was "unacceptable" for the tanks to be crossing into Ukraine, his press secretary said.

Pro-Russian separatists in the Donetsk and Luhansk regions declared independence after holding referendums last month which were deemed illegal by the government in Kiev.

Ukraine and the West accuse Russia of supporting and arming the rebels - a claim denied by Moscow.

The rebellion began amid the turmoil which followed February's ousting of President Viktor Yanukovych, whose last-minute decision not to sign a landmark treaty with the European Union in November sparked mass street protests in Kiev.