A gunman has killed a 14-year-old student at an Oregon high school in the latest in a spate of shootings in the United States.

The gunman, said to be another student, also died in the shooting at Reynolds High School in the north-western state, taking his own life, according to media reports. 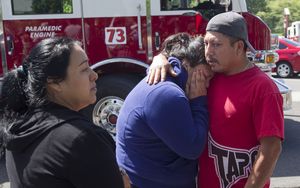 Police named the victim as Emilio Hoffman, who died in a boys' locker room of the school's gym building.

The shooter, who has still not been identified, was found in a separate bathroom.

Police Chief Scott Anderson praised the actions of two school resource officers who were among the first to respond to the shootings. "I believe their quick response saved many of our students' lives."

It is the fourth shooting in three weeks in the region, AFP reports.

On 23 May, a student with mental problems, the son of a Hollywood director, went on a gun rampage at a college campus in Santa Barbara, north of Los Angeles, killing six people and then himself.

On 5 June, a gunman killed one person and injured two others on on a college campus in the northwestern US city of Seattle, in what the local mayor denounced as America's "epidemic of gun violence".

Last Sunday, a couple with possible links to anti-government militia shot dead two police officers execution-style in a Las Vegas pizza restaurant, before killing another civilian nearby and then themselves.

President Barack Obama on Tuesday said such attacks were "becoming the norm" and dismissing the argument shootings were primarily a mental health issue.

"The United States does not have a monopoly on crazy people," Mr Obama said during a Tumblr online forum.

"It's not the only country that has psychosis, and yet we kill each other in these mass shootings at rates that are exponentially higher than any place else. What's the difference? The difference is that these guys can stack up a bunch of ammunition in their houses."