Three people including two police officers have been killed in a shooting spree in Las Vegas in the United States.

Authorities say two suspects - a man and a woman - then killed themselves. 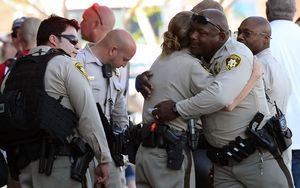 Officers comfort each other on Sunday. Photo: AFP / Getty Images

The shooting spree began when a man and a woman walked into a pizza restaurant and shot the two officers as they were having lunch about 11.30am on Sunday, the BBC reports.

Authorities said the couple then fled to a Walmart store across the street where they shot an innocent bystander.

After shouting at customers to get out of the shop, the pair then went to the back. The woman shot her male companion before turning the gun on herself, Sheriff Doug Gillespie of the Las Vegas Metro Police Department said.

The motive is being investigated, but police said it appeared to be a suicide pact. A spokesperson for Walmart said it was a senseless act of violence.

Nevada Governor Brian Sandoval later said he was devastated by the murders of the two police officers - Alyn Beck, 42, and Igor Soldo, 32 - and an innocent bystander. 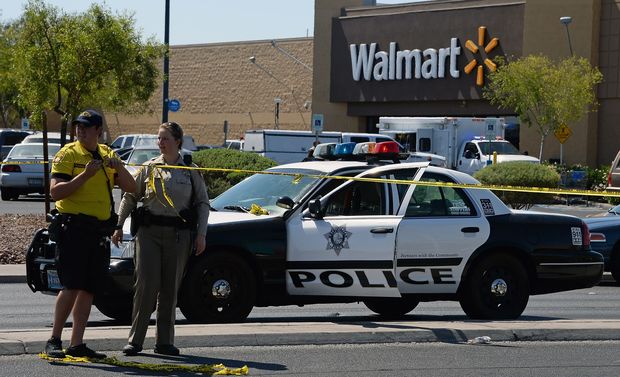 Police cordon off the area near where the shootings took place. Photo: AFP / Getty Images