Fighters from Nigerian Islamist group Boko Haram have killed dozens of people in attacks on villages in remote parts of Borno state in the north.

A local member of parliament has confirmed the attacks and said that at least five other villages had been targeted. 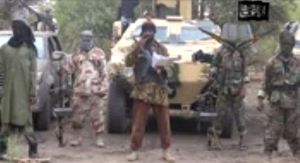 A video image of members of Boko Haram including leader Abubakar Shekau, centre, in May. Photo: AFP / Boko Haram

Boko Haram has waged an increasingly bloody insurgency since 2009 to create an Islamic state in the African country, and since May this year has been holding more than 200 schoolgirls captive, the BBC reports.

Residents in the village of Attagara, close to the Cameroonian border, said that armed men ordered them into a church compound.

They said they were lead to believe the men were from the Nigerian military. Eyewitnesses said the men then opened fire on the crowd.

Nigerian MP Peter Biye told the BBC that there had been several similar attacks in the area and that many houses had been destroyed.

On Tuesday, reports surfaced in the Nigerian media that 10 generals and five other senior military officers had been accused of helping Boko Haram.

Reports said the officers had faced a court-martial and had been found guilty of supplying arms and information to the militant group.

However, Nigerian army spokesman Major General Chris Olukolade categorically denied the reports, calling them "falsehoods" designed to do "maximum damage to the image of the Nigerian Army".

"There is no general of the Nigerian Army under any form of trial," he said in a statement.

But Interior Minister Abba Moro said it was "good news" that the military high command has identified soldiers undermining the fight against the insurgents.