Syrians are voting in an election expected to deliver an overwhelming victory to President Bashar al-Assad in the midst of a civil war that has fractured the country and killed at least 160,000 people.

For the first time in five decades, the Assad family is facing sanctioned challenges from two government-approved candidates, but Mr Assad is widely expected to win a third seven-year term in office. 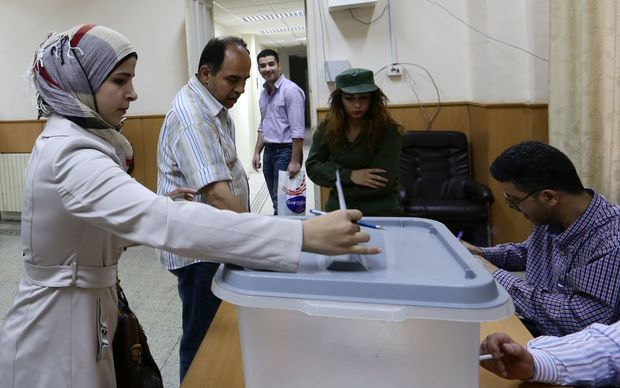 A woman casts her ballot at a polling station in central Damascus. Photo: AFP 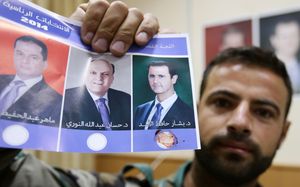 Candidates Maher Hajjar and Hassan al-Nouri are not widely known and have been unable to campaign on an equal footing with Mr Assad, the BBC reports.

Campaigning officially ended on Monday and workers across central Damascus removed banners, posters and pictures of the candidates. Analysts say Syrian officials have gone to great lengths to present the vote as a way to resolve the crisis.

But Western-backed opposition Syrian National Coalition denounced the election as a sham and urged a boycott.

"A butcher cannot become a legitimate president, even it the number of ballot boxes reaches the number of rockets which fell on the heads of the electorate, coalition president Ahmad Jarba said.

"The days of the Assad family rule are over, Assad's elections will fool no one, and democracy cannot be built on the skulls of babies and the remains of people's bodies."

Prime Minister Wael al-Halqi said the election was a "historic day" for Syria and that a large turnout would "prove to the entire world that the Syrian people have decided and are determined to make the electoral process a success".

He urged Syrians to elect a president who would "achieve security and stability in the country... and step up the achievement of national reconciliation".

Bashar al-Assad's forces, backed by allies including Iran and Lebanon's militant group Hezbollah, have consolidated their control in central Syria, but the rebels and foreign jihadi fighters hold vast areas of northern and eastern parts of the country.