The Obama administration has set out ambitious plans to cut pollution from US power plants, to help ease global warming.

The US Environmental Protection Agency's (EPA) Clean Power Plan seeks to cut carbon emissions by 30% by 2030. 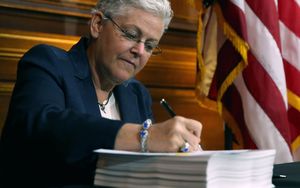 EPA Administrator Gina McCarthy was unveiling the proposals, which mark the most sweeping and significant environmental regulations introduced by the administration.

"Although we limit pollutants like mercury, arsenic, sulphur currently there are no limits on carbon pollution from power plants," she said.

"For the sake of our families' health and for our kids' future we have a moral obligation to act on climate."

The rules seek to reduce carbon emissions by 30% below 2005 levels, which the EPA says is equal to the emissions from powering more than half the homes in the US for one year.

Particle pollution, sulphur dioxide and nitrogen oxides may also be reduced by more than 25% as a co-benefit, the EPA wrote.

Critics have argued the new US rules will cause power plants to close and electricity prices to rise and could harm the economies of America's coal-producing regions.

But the EPA estimates the new rules will shrink electricity bills by 8% by increasing energy efficiency and reducing demand on the electricity system.

In 2010, Senate Republicans blocked a Democratic effort to pass a bill limiting carbon-dioxide emissions and allowing companies to buy and sell permits to pollute.

The Obama administration is now relying on a 2007 US Supreme Court ruling that gave the EPA, part of the executive branch of the US government under Mr Obama's control, the authority to regulate carbon dioxide under the Clean Air Act without action by Congress, the BBC reports.