Thailand's military government has sent thousands of troops and police into central Bangkok to stop any demonstrations against its seizure of power.

Anticipating protests from the two rival political groups, the red shirts and yellow shirts, some shopping malls and train stations in the capital have closed.

The military imposed a night time curfew and banned all political gatherings of five people or more when it seized power on 22 May.

The military took over after the government of Prime Minister Yingluck Shinawatra had been weakened by months of protests that had forced ministries to close for weeks on end, hurt business confidence and caused the economy to shrink.

Reuters reports protests against the coup have taken place in Bangkok most days since then although they have been small and brief.

Deputy police chief Somyot Poompanmoung said 5700 police and soldiers were being sent into central Bangkok and rapid deployment units were ready to stop protests that might spring up elsewhere. 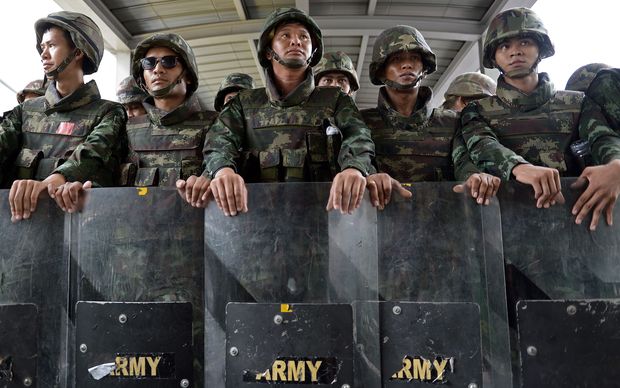 Thai soldiers after they sealed off an elevated train station leading to a shopping mall in downtown Bangkok. Photo: AFP

Some top-end malls around the Ratchaprasong area have chosen to close or have reduced opening hours, and the operator of the Skytrain overhead rail network has shut several stations in the central area.

Reuters reports that by midday on Sunday Ratchaprasong was swarming with police and media but there was barely a protester to be seen.

On Saturday, as on the two previous days, the authorities effectively closed down the normally busy roads around Victory Monument, which was becoming a focal point for opposition to the coup. The area was flooded with police and troops but no protesters turned up.