Pro-Russian rebels in eastern Ukraine have shot down a military helicopter near Sloviansk, killing 14 people, according to the country's outgoing president.

The BBC reported Olexander Turchynov saying the rebels used a Russian-made anti-aircraft system, and that an army general was among the dead.

The town of Sloviansk has seen fierce fighting between separatists and government forces in recent weeks.

President-elect Petro Poroshenko has vowed to tackle "bandits" in the east. 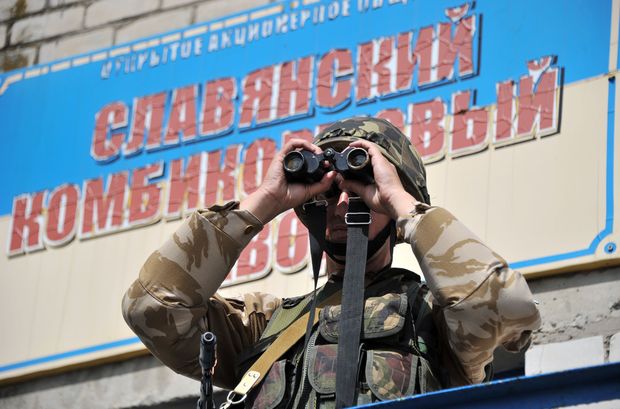 A Ukrainian army soldier stands guard at a checkpoint outside of Slaviansk. Photo: AFP

Russia has reiterated calls for Ukraine to stop its military campaign against the pro-Moscow rebels and "start a real national dialogue".

The Russian foreign ministry also urged the United States and European Union "to use all their influence on Kiev to stop Ukraine's slide into national catastrophe".

It is one of the worst losses of life for government forces in the conflict, according to the BBC. Last week at least 14 soldiers died in a rebel attack on an army checkpoint near Donetsk, some 130km from Sloviansk.

Earlier this month, separatists shot down two army helicopters, also near Sloviansk, killing a pilot and another serviceman.

Mr Poroshenko has called the separatists "terrorists" intent on maintaining a "bandit state". After Sunday's election he vowed to tackle them "in hours", not months.