President Barack Obama has defended his global leadership, rebuking critics who see him as weak, but warning that not every global threat justifies a military response by the United States.

In a speech at the West Point military academy on Wednesday, Mr Obama denied US power had ebbed under his watch, after he withdrew troops from Iraq and as he does the same in Afghanistan. 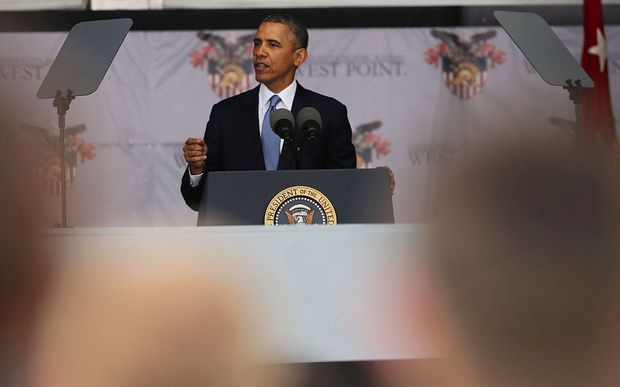 He also pledged to increase support for Syrian rebels, vowed to stand up to Russia over Ukraine and promised to make drone strikes against terror suspects more transparent.

He vowed to hold China accountable to international "rules of the road" in the South China Sea and elsewhere.

"To say that we have an interest in pursuing peace and freedom beyond our borders is not to say that every problem has a military solution," Mr Obama said.

"Since World War II, some of our most costly mistakes came not from our restraint, but from our willingness to rush into military adventures, without thinking through the consequences."

The president is under assault from critics who believe he is being outmanoeuvred by President Vladimir Putin of Russia and President Xi Jinping of China.

"Here's my bottom line: America must always lead on the world stage. If we don't, no one else will,'' he said. ''The military ... is, and always will be, the backbone of that leadership.

"Tough talk often draws headlines, but war rarely conforms to slogans," Mr Obama said. "Just because we have the best hammer does not mean that every problem is a nail."

The president also said that terrorism remained the biggest national security threat to the United States and unveiled a new $US5 billion fund to equip and train allies on the front lines of the struggle against terrorism.