Fugitive whistleblower Edward Snowden has rubbished claims by the United States government he was merely a low-level analyst, saying that he was a spy.

Mr Snowdon, 30, fled the US in May last year after leaking details of mass-surveillance gathering programmes and has been living under temporary asylum in Russia. 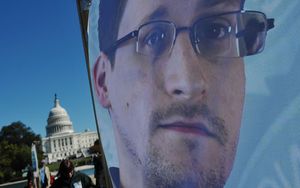 Edward Snowden said he put systems to work for the US at all levels. Photo: AFP

]In an interview recorded in Moscow for the American NBC TV network, he said he did far more than Washington has ever admitted, the ABC reports.

"I was trained as a spy in sort of the traditional sense of the word, in that I lived and worked undercover overseas, pretending to work in a job that I'm not and even being assigned a name that was not mine."

Mr Snowden said he also developed sources and methods for keeping US information and people secure in the most hostile and dangerous environments around the world.

Describing himself as a "technical expert", Mr Snowden said: "I don't work with people. I don't recruit agents. What I do is I put systems to work for the United States. And I've done that at all levels, from the bottom on the ground, all the way to the top."

He said he worked undercover overseas for the CIA and National Security Agency (NSA) and lectured at the Joint Counterintelligence Training Academy, "where I developed sources and methods for keeping our information and people secure in the most hostile and dangerous environments around the world".

"So when they (critics) say I'm a low-level systems administrator, that I don't know what I'm talking about, I'd say it's somewhat misleading."

Snowden is believed to have taken 1.7 million computerised documents. They revealed revealed massive programmes run by the NSA that gathered information on emails, phone calls and internet use by hundreds of millions of Americans.