Army helicopters have fired on the main terminal of Donetsk airport in eastern Ukraine. 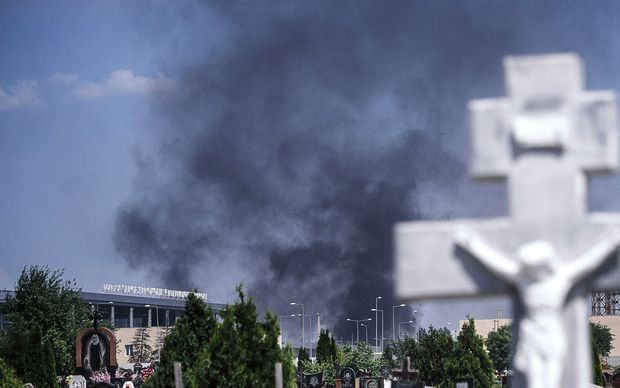 Pro-Russia rebels stormed Sergei Prokofiev Donetsk airport on Monday after it became clear that outright victory in Ukraine's presidential election had been won by Petro Poroshenko.

Fighter jets circled the airport as helicopters fired rockets at the building. The BBC reports there are no confirmed reports of casualties.

It is three months since president Viktor Yanukovych fled Kiev amid bloody street protests and calls for closer ties with the EU.

Since then, Russia has annexed the Crimean peninsula in southern Ukraine and armed separatists in the eastern provinces of Luhansk and Donetsk have declared independence.

At a news conference in Kiev, Mr Poroshenko said the government's military offensive needed to be "quicker and more effective".

"The anti-terrorist operation should not last two or three months. It should last for a matter of hours," he said. As for the rebel fighters:

"They want to preserve a bandit state which is held in place by force of arms," he said. "These are simply bandits. Nobody in any civilised state will hold negotiations with terrorists.

"Their goal is to turn Donbass (east Ukraine) into Somalia. I will not let anyone do this to our state and I hope that Russia will support my approach."

Latest results gave Mr Poroshenko over 54 percent of the vote, well ahead of former prime minister Yulia Tymoshenko with 13 percent.

That means he will avoid the need for a run-off that would have extended uncertainty and put more pressure on East-West relations.