A freight train collided with a passenger train near Moscow on Tuesday, ripping the side off one of the carriages and killing at least six people.

Russian officials said the death toll could rise after several carriages were derailed. 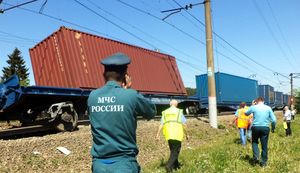 The site of a collision of freight and passenger trains 55 kms from Moscow. Photo: AFP

The train had been on its way from Moscow to Chisinau the capital of Moldova, before the collision near the town of Naro-Fominsk, 55 kms southwest of the Russian capital.

Russian officials say the cause of the collision may have come down to a broken rail.

Officials said five people had died at the scene and a sixth had died in hospital. Another 45 people were injured, 25 of whom were taken to hospital for treatment.

Several carriages on the goods train came off the rails near the town of Naro-Fominsk and hit the passenger train, which was reportedly carrying about 400 people.

Radio New Zealand's correspondent in Moscow said a side of the passenger train was ripped off in the derailment, which is thought to have led to the deaths and injuries.