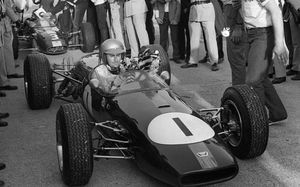 He died after collapsing on Monday morning.

Brabham travelled to Europe in 1955 and before long he was building his own cars - revolutionising the sport by shifting the engine from the front of the vehicle to the back.

In 1959 he won the first of his three championships, famously running out of fuel in the last race and pushing his car to the finish.

In 1966 he became the first driver to win the championship in a car he had built himself - the BT19. He won the constructors' championship that year, and again in 1967.