A fire broke out on Saturday in part of a mine where nearly 300 miners were killed in Turkey's worst ever industrial disaster, hindering efforts to find up to three remaining workers believed to be still underground.

The country's energy minister Taner Yildiz told reporters the bodies of 15 miners were retrieved overnight, bringing the death toll to 299, and as many as three workers were still in the mine. They were unlikely to be alive, four days after an initial fire sent deadly carbon monoxide coursing through the mine.

"It is a localised fire, but it is important and we have to take note of it," Mr Yildiz said. "Naturally until it is brought under control we can't do anything about up to three workers (believed still there)." 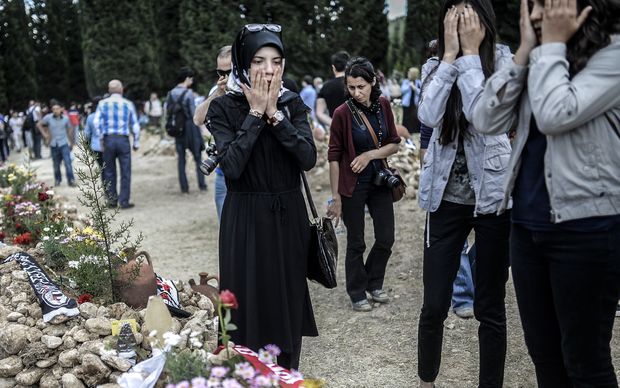 People mourning in a graveyard in Soma three days after the mine explosion. Photo: AFP

As the fire started, rescue teams were seen leaving the mine in the western town of Soma while fire-fighting teams went in.

Anger has swept Turkey as the extent of the disaster became clear, with protests aimed at mine owners accused of ignoring safety for profit, and at Prime Minister Tayyip Erdogan's government, seen as too close to industry tycoons and insensitive in its reaction to the tragedy.