Several factories have been set on fire amid anti-China protests at an industrial park in southern Vietnam, amid tensions over the South China Sea. 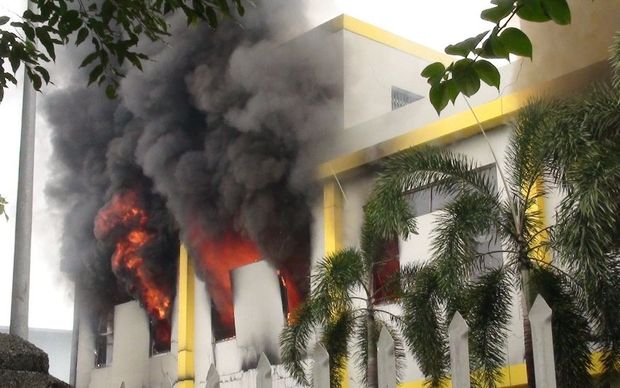 The park's management said three factories were set on fire but other reports put the figure as high as 15, the BBC reports.

No casualties have been reported but officials said many arrests were made.

The protests came after China moved a drilling rig into waters claimed by Vietnam earlier this month.

In a daily press briefing, a Chinese Foreign Ministry spokesman said Vietnam was a "provocateur" and that Beijing had expressed concern to Hanoi.

The management of the Vietnam Singapore Industrial Park (VSIP) said that protesters gathered on Monday in Thuan An town, in the southern Binh Duong province.

On Tuesday they moved on to VSIP's two industrial parks nearby and targeted factories owned or managed by the Chinese and Chinese expatriates.

A spokesman for VSIP told the BBC the three factories were set on fire on Tuesday night after workers had gone home.

Not all of the tenants of the three factories were Chinese companies; some Taiwanese companies were also affected, she said.

Other reports suggested the violence was more widespread, with more factories targeted.

A local official estimated about 19,000 workers took part in the protest and that at least 15 factories were set on fire, according to local media.

One photo carried by Vietnamese media showed a factory had draped a South Korean flag at its entrance in a bid to stave off attacks.

Earlier this month, China moved its Haiyang Shiyou 981 oil rig to a spot 120 nautical miles off the coast of Vietnam.

The area is near the Paracel Islands, over which China and Vietnam have contesting claims.