Seven Ukrainian soldiers have been killed and seven wounded in an ambush by insurgents in the eastern Donetsk region.

The defence ministry says the unit was attacked near the town of Kramatorsk by about 30 heavily-armed rebels, the BBC reports. 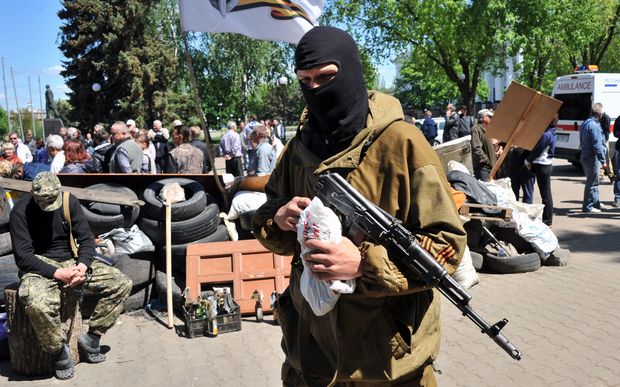 An Armed pro-Russian militiant guards a barricade outside the regional state building in Kramatorsk. Photo: AFP

A unit was attacked near the town of Kramatorsk by about 30 heavily-armed rebels, the defence ministry said. One rebel is also said to have died.

Donetsk is one of two regions declared separate from Ukraine after referendums deemed illegal by Kiev, the United States and European Union.

The defence ministry said an armoured personnel carrier carrying paratroopers was hit by a rocket-propelled grenade and exploded.

More soldiers were killed or injured in a fight which ensued with the insurgents, who were said to be hiding in bushes.

On Monday, the pro-Russian separatists who declared independence in Donetsk said that all Ukrainian troops in the region would be viewed as occupying forces and should leave.

Their leader Denis Pushilin called on Russia to "absorb" the Donetsk region.

Meanwhile in the neighbouring Luhansk region, separatists said an attempt was made on the life of a rebel leader.

Self-declared governor Valery Bolotov was shot and had lost a lot of blood, but his life was not in danger, the press office of the 'Luhansk People's Republic' said.

Separatists in Donetsk and Luhansk say 89 percent and 96 percent respectively voted in favour of 'self-rule' in the referendums.

Armed rebels remain in control of many official buildings across eastern Ukraine.