France has offered to host a summit with Nigeria and its neighbours focused on the Boko Haram group. 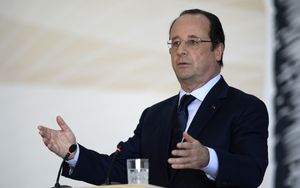 President Francois Hollande made the announcement on Sunday during a visit to Azerbaijan.

Global outrage over Boko Haram's abduction of 200 schoolgirls on 14 April has focused attention on the group, which has destabilised large parts of north-east Nigeria and its neighbours.

"If the countries agree, it should take place next Saturday" in Paris, Mr Hollande added.

Aides said that the leaders of Nigeria, Benin, Cameroon, Chad and Niger might attend. Britain, the European Union and the United States would likely be represented as well.

France, Britain, the United States and other countries are sending specialists to help Nigeria track down and free the schoolgirls.

Defence Secretary Chuck Hagel said there is no intention of sending troops at this stage.

Israel, which has defence ties with Nigeria, has also offered assistance.

The Nigerian army has mobilised two divisions to hunt for the girls.

The government of President Goodluck Jonathan is under heavy criticism for not responding more quickly to the abductions.