New Zealand Rugby Union chief Steve Tew has warned that a push to move June internationals back and create an integrated global rugby season by 2016 remains a "long shot". 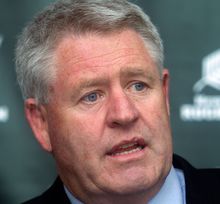 The International Rugby Players' Association (IRPA) has campaigned for the June test window to be pushed back to the end of July to allow southern hemisphere-based players to finish the Super Rugby tournament and have Europe-based players start their domestic campaigns later.

The proposal, supported by players in both hemispheres, would increase player welfare and help safeguard the future of the game according to the IRPA, but would not require re-scheduling of the major Six Nations and Rugby Championship tournaments.

But, ahead of a four-day meeting between national union chiefs in Dublin, Mr Tew said at best, the idea would be a work in progress.