Catholic bishops in Argentina say the country is "sick with violence" and compared corruption to a cancer "causing injustice and death". 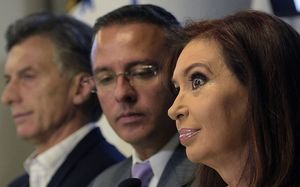 In a statement issued at their annual conference on Friday, they said violence was getting more ferocious than ever.

The government of President Cristina Fernandez de Kirchner responded by saying this was a "deliberate attempt" to blame it for the insecurity.

The BBC reports Friday's statement by the bishops focused mainly on the rising violence.

"We notice with pain and concern that Argentina is sick with violence. Some symptoms are clear, others more subtle," they wrote.

"Criminal acts have not only risen in number but in aggressiveness - a violence ever more ferocious and merciless."

The statement said the Church wishes to see judges and prosecutors acting swiftly, independently and calmly.

The bishops also criticised "public and private" corruption, calling it a real "social cancer", which causes "injustice and death".

However the bishops warned people against acts of vengeance or taking justice into their own hands.

Her administration has had differences with the Catholic church before. However, relations have thawed to some extent, since the appointment of Pope Francis in 2013.