An Australian naval vessel carrying an underwater drone involved in the search for MH370 left port on Saturday to scan part of the Indian Ocean where the longest sonar "ping" was heard over a month ago.

The Ocean Shield is heading to the area where a signal was first located and heard on 5 April about 1600 kilometres northwest of Perth to launch the Bluefin-21 submersible, reports Reuters. 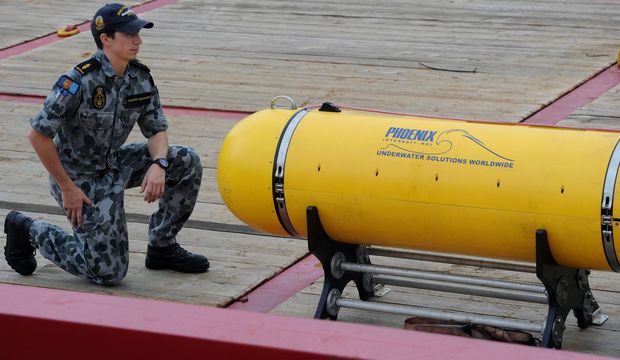 More than two dozen countries have been involved in the hunt for the Malaysia Airlines Boeing 777 that disappeared from radar shortly after taking off from Kuala Lumpur for Beijing with 239 people on board in one of the world's greatest aviation mysteries.

The passengers included two New Zealanders - Paul Weeks, 38, who was flying from Perth to a mining job in Mongolia and Ximin Wang, 50, who is described on the electoral roll as a student.

Weeks of daily sorties have failed to turn up any trace of the plane, even after narrowing the search to an arc in the southern Indian Ocean. Batteries on the black box voice and data recorders have gone flat.

The search had been centred on a 314 square kilometre area around the second "ping" located and monitored for about 13 minutes on 5 April, and which search authorities identified as their strongest lead.

With the search of that area complete, the focus is shifting to the area where the first, and longer, signal was detected the same day, American Navy Captain Mark Matthews told journalists at a naval base near Perth.

Australia, China and Malaysia earlier this week pledged not to give up searching for the plane, even though air and surface searches for debris have been abandoned.

The Ocean Shield returned to Stirling Naval Base south of Perth earlier this week after more than a month at sea to resupply, change crew and perform software modifications and maintenance on the Bluefin.

The submersible has dived to a maximum depth of 5,005 metres in its daily 20-hour missions to scan the ocean floor using sonar, despite being only designed to dive to 4500 metres, Captain Matthews said.

With just three weeks left on loan from the US Navy, the pressure is on about how to proceed and who will pay for the next phase of the search. The Ocean Shield, which will take three days to arrive at the search location, is due back in port by the end of the month.