Thai police have fired teargas at anti-government protesters trying to force their way into a police compound housing a government security group in Bangkok, a Reuters witness said.

Police fired about seven teargas canisters at hundreds of protesters massed outside the compound on a main road in the north of Bangkok where the government's Center for the Administration of Peace and Order is based.

Many of the protesters, who are trying to bring down the country's caretaker government, then withdrew.

The protests came after a court threw Prime Minister Yingluck Shinawatra out of office and an anti-graft agency indicted her for negligence.

Ms Yingluck's Puea Thai Party still runs the interim government and is hoping to organise a 20 July election that it would probably win. 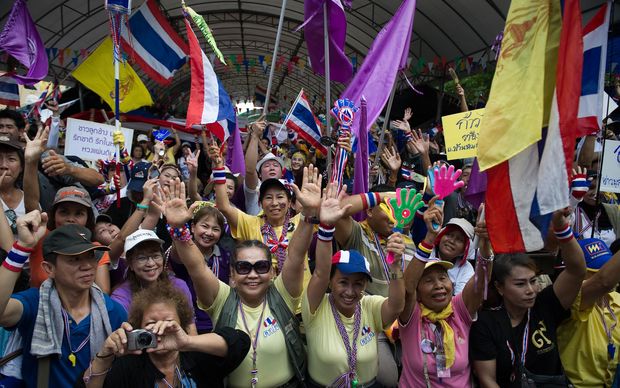 But the protesters want the government out, the election postponed and reforms to end the influence of her brother, former premier Thaksin Shinawatra.

Protest leader Suthep Thaugsuban, speaking to supporters in a city park, urged them to rally outside parliament, the prime minister's offices and five television stations to prevent them being used by the government.

"We will sweep the debris of the Thaksin regime out of the country," said the former deputy premier in a government run by the pro-establishment Democrat party.

Mr Thaksin, who is vilified by his enemies as a corrupt crony capitalist, won the unswerving loyalty of legions of rural and urban poor with populist polices when he was prime minister from 2001 until he was ousted in a 2006 coup.

He lives in exile to avoid a 2008 jail sentence for abuse of power but has been the guiding hand behind his sister's government.

Protesters waving red, white and blue Thai flags later set off from the park for rally sites, most in Bangkok's historic quarter.

Some protesters held pictures of Mr Thaksin and Ms Yingluck with their faces crossed out. Others held banners that read: "Love Thailand, eradicate the Thaksin regime".

Tens of thousands of the Shinawatras' "red shirt" supporters, angered by YMs Yingluck's ousting, are also on their way to Bangkok for a rally on Saturday. They are clinging to the hope that the interim government will win the July election and bring the Shinawatras' party back to power.