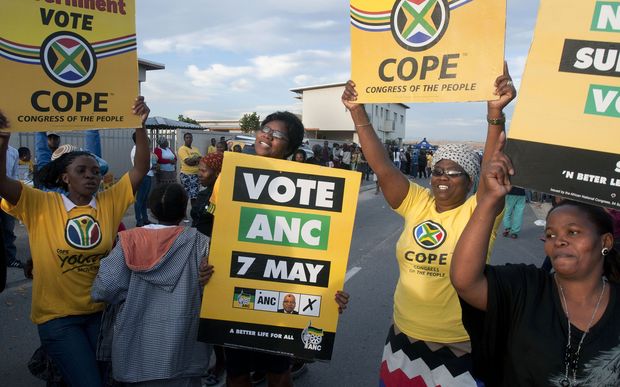 Supporters of rival ANC and Congress of the People (COPE) parties at a Cape Town polling station. Photo: AFP

The Economic Freedom Fighters party, led by left-winger Julius Malema who was expelled from the ANC, is in third place with 5 percent.

The electoral commission said voting passed peacefully in most areas.

Turnout was just over 72 percent, with about 25 million people registered to vote in 22,000 polling stations across South Africa.

The elections are the first since the death in December of Nelson Mandela - the country's first black president - and mark 20 years since the end of white-minority rule.

Dissatisfaction with the government has been growing over high levels of unemployment, a lack of basic services and allegations of widespread corruption.

The BBC reports the ANC is likely to use its impressive mandate to try to drive through its National Development Plan - rejecting nationalisation, and emphasising investment and infrastructure.