In an apparent policy shift, Russia's President Vladimir Putin has described Ukraine's election on 25 May as a step "in the right direction".

But Mr Putin said the vote would decide nothing unless the rights of "all citizens" were protected.

Mr Putin has also called for an independence referendum, planned this weekend by pro-Russian separatists in the east, to be delayed, a move that Ukraine's interim Prime Minister has described as "hot air". 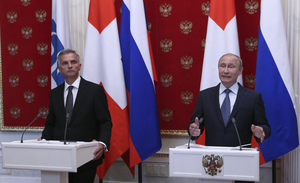 Moscow has said it will protect the rights of the largely Russian-speaking people in the south and east against what it calls an undemocratic government in Kiev, the BBC reports.

Kiev has rejected pro-Russian activists' demands for greater autonomy, fearing it could lead to the break-up of the country, and has sent in troops in recent weeks to seize back official buildings occupied by rebels.

Mr Putin suggested that Kiev's military operation in eastern Ukraine could be halted in exchange for a postponement of the referendum scheduled to take place in several areas on Sunday.

Earlier, pro-Russian separatists took back the city hall in the southern port of Mariupol after it was briefly taken over by Ukrainian government forces.

The Ukrainian government has asked its football league to hold remaining championship matches without spectators because of the risk of trouble.

It also wants games in the volatile south-eastern region to be moved to other parts of the country.

The call comes after clashes between supporters of a united Ukraine and pro-Russian groups at recent games.