The abduction of the girls, aged 12 to 15, follows the kidnapping of more than 200 other schoolgirls by the militant group last month, whom it has threatened to sell into slavery.

A police source, who asked not to be identified, said the girls were taken away on trucks, along with looted livestock and food. 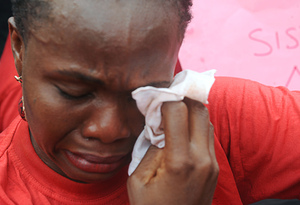 Boko Haram leader Abubakar Shekau threatened in a video released to the media on Monday to sell the girls abducted from a secondary school on 14 April "on the market".

Nigerian President Goodluck Jonathan welcomed a US offer to send an American team to Nigeria to support the government's efforts to find the girls, the US State Department said on Tuesday. British Foreign Minister William Hague reiterated an offer of help to Nigeria on Tuesday, after calling the abductions "disgusting and immoral".

The United Nations warned Boko Haram that if they carried out their leader's threat to sell the girls, they would forever be liable to prosecution for war crimes, even decades after the event.

The military's inability to find the girls in three weeks has led to protests in the northeast, Abuja and Lagos, the commercial capital.

The kidnappings by the Islamists, who say they are fighting for an Islamic state in Nigeria, have shocked the country and embarrassed its government before a World Economic Forum (WEF) meeting on Africa.

Nigerian officials had hoped the event would highlight their country's potential as Africa's hottest investment destination since it became the continent's biggest economy from a GDP recalculation in March, but the forum has been overshadowed by the crisis over the girls, whose whereabouts remain a mystery, Reuters reports.

That has thrown the government's failings on national security into the spotlight just when it sought to parade its achievements such as power privatisation and economic stability to top global business people and politicians.

The Islamist insurgency by Boko Haram has left thousands dead since 2009.

April's mass kidnapping occurred on the day a bomb blast, also claimed by Boko Haram, killed 75 people on the edge of Abuja, the first attack on the capital in two years. Another bomb in roughly the same place killed 19 people last week.