Eight more bodies have been recovered from a ferry that sank off the coast of South Korea last month, and there are concerns that some of the missing may have been swept out to the open sea. 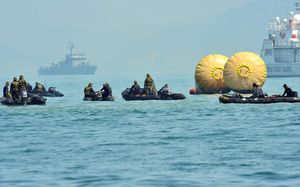 Dive crews at the site of the ferry disaster. Photo: AFP

It is 17 days since the Sewol capsized and sank. According to the Yonhap news agency, 236 people are confirmed dead and 66 remain unaccounted for.

The search of the sunken ship by divers was suspended again on Saturday, due to fast currents and high waves whipped up by gusty winds.

Ministry of Oceans and Fisheries spokesman Park Seung-Ki said bedding materials from the ship were found as far as 30km from the disaster site on Friday.

One body was retrieved on Friday by a fishing vessel 4km from the ferry, and another was found 2km away on Wednesday.

The Sewol capsized on 16 April with 476 people on board. More than 300 were from Danwon High School in Ansan city, just south of Seoul.

The Sewol's regular captain, who was off duty on the day of the tragedy, has told prosecutors that Chonghaejin Marine Co "brushed aside" repeated warnings that the 20 year-old ship had stability issues following a renovation in 2012.

Two Chonghaejin officials were arrested on Friday on charges of having the ferry overloaded well beyond its legal limit.